Update Sept. 9: the OLED model will be called iPhone X, according to iOS 11, as leaked this morning. So keep that in mind when you’re reading this post, which was published last night (in other words, replace iPhone 8 with iPhone X).

Now, KGI Securities analyst Ming-Chi Kuo has released a note to investors, detailing how the ‘Face ID’ camera within iPhone 8 will work. In the iPhone 8 ‘notch’, there will be a structured light transmitter (new), structured light receiver (new), proximity sensor, ambient light sensor and front camera.

Here’s how Kuo explains the different components working together (via 9to5Mac):

Given the distance constraints of the structured light transmitter and receiver (we estimate 50-100cm), a proximity sensor (with ToF function) is needed to remind users to adjust their iPhone to the most optimal distance for 3D sensing.

As for the structured light receiver, it has four components: an IR lens, filter, CIS, and CMOS image sensor (1.4MP).

Below is a graphic from Kuo obtained by AppleInsider, showing all the different suppliers for Face ID: 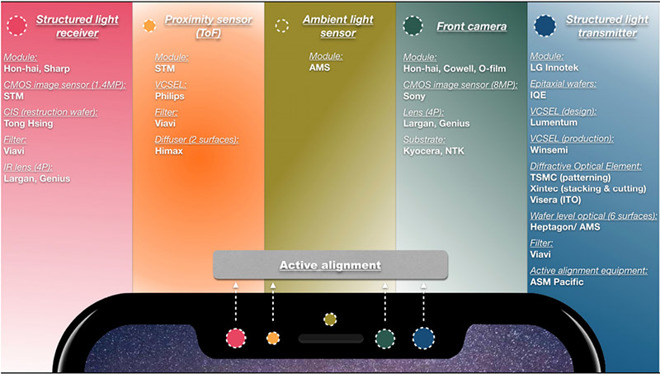 Kuo says there may be 3D sensing component supply issues, which is why many are noting iPhone 8 will be in short supply and ship later this fall.

The analyst also says iPhone 8 will come in white, black and gold rear casings, while the front glass on all models will be—black (yes!) to conceal the sensors versus a white front.