Find Out How Long Apple Will Support Your Existing iPhone Model

With Apple all set to roll out its latest iOS 14 to the general public today, an interesting chart shared by Statistica gives us a good look at how long Apple is likely to support your existing iPhone model. The graphic references the historic iOS compatibility of every iPhone model released to date. 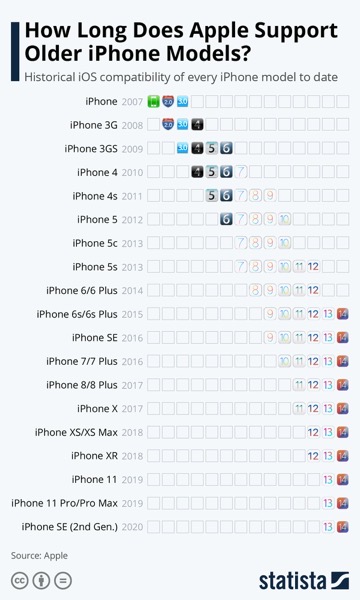 Last year, users of the 2013 iPhone 5s and the 2014 iPhone 6 and 6 Plus were left behind in the jump to iOS 13. This year, however, all iPhone models that supported iOS 13 will be fully compatible with iOS 14 as well.

As you can see in the chart above, Apple seems to have extended the life cycle of iPhone models over the years quite a bit. While the original iPhone and the iPhone 3G received two major iOS updates, later models have gotten software updates for five to six years.

The iPhone 6s was launched with iOS 9 in 2015 and will still be compatible with this year’s iOS 14.