Apple is set to kick off its special event on September 10 to most likely announce its latest iPhone 11 line up.

The September 10th event kicks off at 10AM PDT/1PM EDT and can be viewed on Apple’s website, Apple TV or YouTube. 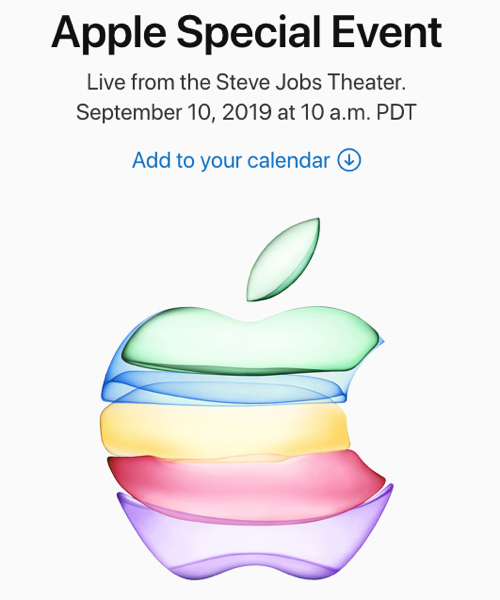 To watch Apple’s event live on its website, just click here. The video should start just before 10AM PDT/1PM EDT.

Apple’s requirements for web streaming are “Safari on iOS 10 or later; a Mac using Safari on macOS Sierra 10.12 or later; or a PC using Windows 10 and Microsoft Edge.” The company says newer versions of Chrome or Firefox with MSE, H.264 and AAC will also be able to access the stream.

You can watch the iPhone 11 launch event by loading up the Apple Events app on your Apple TV 4/4K, as seen below:

If you don’t have the app, search for it in the App Store by typing in ‘Apple Events’.

That’s right—YouTube. Apple will be streaming a special event on YouTube live for the first time. The video below is the link to start streaming at 10AM on September 10, 2019:

Apple says they will send out reminders and news regarding their Apple Event on Twitter. Just tap the ‘heart’ icon in the tweet below and Apple will remind you on September 10 of news and more:

It's coming soon. Tap ❤️ below to get reminders and news around the #AppleEvent. Watch it live on September 10 at 10 a.m. PDT on https://t.co/yLa2e4Xr2R pic.twitter.com/Pq6OFGH88p

We won’t be live-tweeting the event this year but stay tuned to the site for all the updates.

Click here to read about what to expect from Apple’s iPhone 11 event.

Just one more sleep and the big day will be here shortly (#prayforyourwallet).