Publishers that use Apple’s iBookstore received a letter from iTunes Connect saying that they have rolled out some updates and changes. 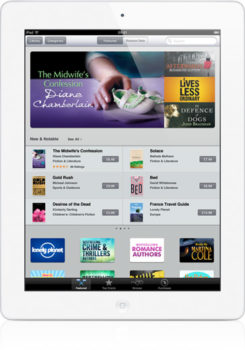 The most welcome improvement for publishers is most likely the ability to issue up to 50 promo codes to book reviewers, much like App Store developers can for their apps.

Amongst the other changes are the ability to include screenshots of the book, provided they follow the same strict guidelines as App Store screen shots. Only screenshots that are 1024 x 768 or 768 x 1024 in size, are in the RGB colour space, and formatted as either .png, .jpg or .jpeg will be accepted. Apple recently reiterated Retina Display quality screenshots were required for iOS apps.

These enhancements seem like an obvious addition that perhaps should’ve been included from the start, but at least now the iBookstore is more in line with the lay out of App Store apps, allowing publishers to show off their literary and multimedia offerings more freely.

At this time, the Textbooks Category isn’t available in iBooks 2 for Canadians, most likely due to licensing and language issues. Existing users with a US iTunes account can easily get access to textbooks.