Despite posting record iPhone sales, Apple has seen its market share dropping during calendar third quarter, while Android has grown to account for 81% of all smartphone shipments, according IDC’s most recent report. 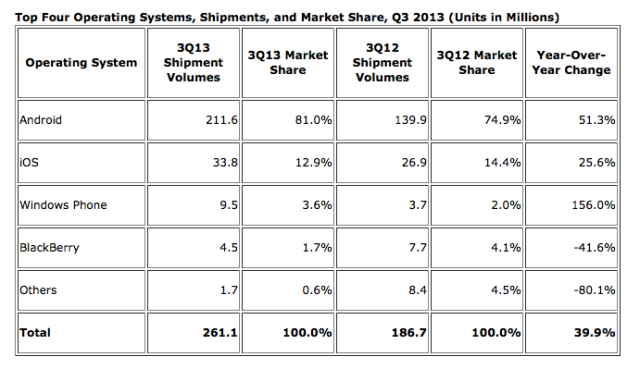 The International Data Corporation estimates a total of 211.6 million smartphone shipments for the third quarter. This means, instead of being at or near market saturation, the smartphone market has grown close to 40% year-over-year during this period.

With 33.8 million iPhones sold between June and September 2013, Apple grabbed 12.9% of the global smartphone market. IDC sort of cites the September launch of the iPhone 5c and 5s, but admits that 9 million units sold in the first week shows that Apple is about to see a record holiday quarter.

What’s interesting is the growth of Windows Phone: it has posted a 156% rise year-over-year, as IDC estimates 9.5 million Windows Phone unit shipments for Q3, 2013, while BlackBerry has recorded a -41.6% drop compared to the same period a year prior, with 4.5 million units shipped.