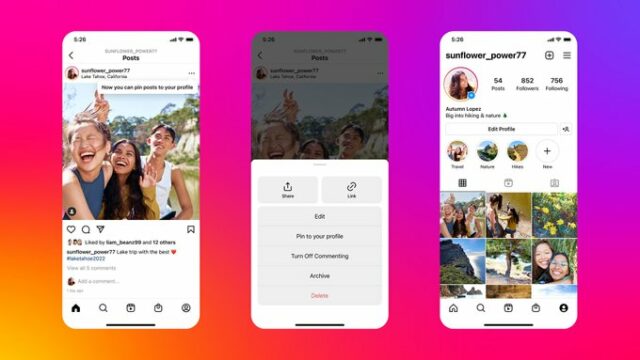 Instagram is rolling out a new feature, enabling users to pin up to three posts or reels to the top of their profile page. The new features are reminiscent of TikTok’s or Twitter’s very own pin feature.

Announced via a Twitter post, Instagram outlined how users will be able to start using the feature. In order to pin posts, users will need to select a desired post or reel. From there, the user must then tap the three dots at the top-right corner of the post. This will bring up the option to ‘Pin to your profile.’ Upon returning to the profile, the user should now see that they have successfully added a pinned post. Any pinned post is marked with a white icon.

You can now choose up to three posts or Reels to pin to the top of your profile. pic.twitter.com/9waQkueckG

These steps can now be repeated to add a second and third post afterwards.

This isn’t the first time we’ve heard the word of a potential pinned feature. Earlier this year, Instagram was reportedly testing this feature on a number of profiles. This new pinning feature expands Instagram’s methods of enabling users to put select memories up front and centre. Users can already “pin” stories using highlights, which appear in designated circles on their profile page. Seemingly, the pins are a way of echoing TikTok’s UI and giving Instagram users a similar experience.

Netflix has been making investments in the gaming space, growing its offering to the subscriber base. However, according to data from app tracker Apptopia, Netflix Games is receiving fairly low engagement with an estimated 1.7 million daily active players. As reported by CNBC, Apptopia finds that roughly one percent of Netflix subscribers engage in its...
Steve Vegvari
2 hours ago

Activision has revealed when it plans to divulge more information on the new entry of the mega-franchise, Call of Duty. On September 15th, developers Infinity Ward will unveil new details regarding Call of Duty: Modern Warfare 2, Warzone 2.0 and Warzone Mobile. Fans of the franchise have been patiently waiting to learn what is in...
Steve Vegvari
3 hours ago

Market intelligence platform CB Insights recently compiled information on all of Apple's acquisitions, investments, and partnerships since the start of 2018 to try and glean the company's current areas of interest (via Apple 3.0). The data not only makes for an interesting infographic but also gives us a glimpse into Apple's plans for the future....
Nehal Malik
17 hours ago