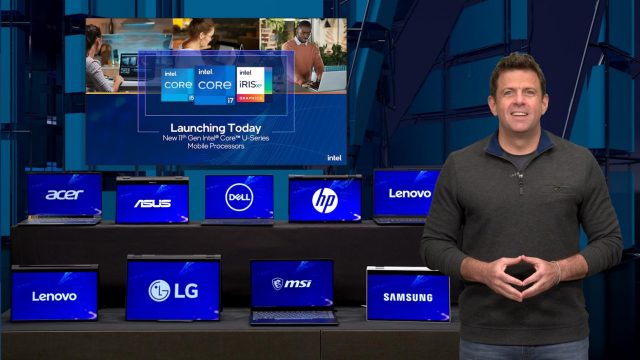 At Computex, Intel launched two new laptop processors in its latest 11th Generation “Tiger Lake” family. The Core i7-1195G7 and the Core i5-1155G7 are U-Series chips, slightly more powerful than most of the existing lineup.

These two processors are the first 5.0 GHz in the U-series and “accelerate the number of designs with Intel Wi-Fi 6/6E (Gig+).” The company plans to build more than 60 new consumer designs using the two new processors and almost 250 OEM designs based on 11th Gen Intel Core.

U-Series CPUs are lower-wattage chips intended for thin laptops and designed for operation in their challenging thermal environments. Some chip models tend to offer dramatic boost clocks for quick up-and-down speedups, ideal for tasks that can make good use of brief bursts of speed.

The new processors will both feature Intel’s Iris Xe integrated graphics. The introduction of these two new SKUs in the Tiger Lake-U lineup will also spread the availability of Wi-Fi 6E-enabled networking solutions.

“We’ve taken the world’s best processor for thin-and-light Windows laptops and made the experience even better with the addition of our two new 11th Gen Intel Core processors with Intel® Iris® Xe graphics,” said Chris Walker, Intel corporate vice president and general manager of Mobility Client Platforms. “In addition, we know real-world performance and connectivity are vital to our partners and the people who rely on PCs every day, so we’re continuing that momentum with more platform capabilities and choice in the market with the launch of our first 5G product for PCs: the Intel 5G Solution 5000.”

Intel also announced the 5G 5000 modem — the first of what will likely be several standalone 5G modems from Intel’s partnership with MediaTek.

Intel says that the 5G 5000 M.2 card will work on any 5G network worldwide that uses sub-GHz technology. It’s got built-in eSIM support and is compatible with Windows, Chrome, and Linux, offering the prospect of inexpensive Chromebooks that can connect to 5G networks.

The modem supports download speeds of up to 4.7GBps, and it can upload at a maximum of 1.25GBps. It’s also backward-compatible with LTE, offering 1.6GBps Cat 19 download speeds. It does not support millimeter-wave 5G, however, which Verizon and a few other carriers have been rolling out in high-density downtown areas.

Intel previewed its new 11th-gen NUC (Next Unit of Computing) tiny desktop at a Computex briefing as well. The mini-PC will be the first NUC to support a full-sized video card, making it even bigger than the recent NUC 9 Extreme model, which could only hold smaller 8-inch GPUs.

The NUC 11 Extreme will be powered by an 11th-gen H-series CPU, so one can expect the platform upgrades that accompany that chip, like PCI Express 4.0 speeds and Wi-Fi 6E. There aren’t any pricing or availability details yet.