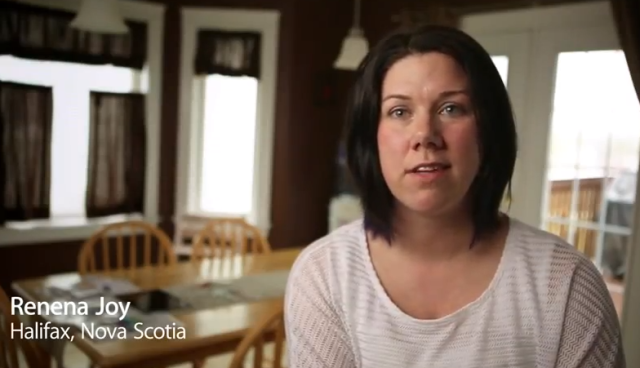 For those that have watched the WWDC 2012 keynote in its entirety, you may remember the developer highlight video Tim Cook showed the audience at the beginning of the event. The video highlighted numerous incredible apps, and one family that was profiled included Renena Joy, a speech and language pathologist in education, and her daughter Mackenzie, from Halifax. It was great to see a Canadian family being profiled in the video.

We caught up with Renena to ask her some questions about her involvement in the video, and in particular the iPad as a learning tool. Renena was still waiting for feedback as to what information she would be able to share from her Apple experience, due to the NDA she signed. Below is the interviewing its entirety.

iPhoneinCanada.ca: When did you purchase your first iPad? When did you realize it could be a learning aid/tool for your daughter Mackenzie? What other Apple products do you own?

Renena: I purchased my first iPad shortly after it’s release in Canada in May 2010. Prior to the release of the iPad, I had seen the iPod touch and thought that it had quite a bit of potential, particularly for use in speech language therapy. The problem with the [iPod touch] was the small screen size which wouldn’t be as conducive to interaction between therapist and students. I was also quite involved in an online professional learning network on Twitter and there was lots of buzz in that forum. The [iPod touch] was being used by some S-LPs as a way to track student data during therapy sessions. Of course, the iPad had a much anticipated arrival and many of us S-LPs who interact on Twitter are of the “techy” type and were excited about its release. ?

Shortly after I purchased the iPad, I started using it in speech language therapy sessions with students. The first and probably most noticeable thing I noticed when I introduced the iPad was the level of engagement of the students. They were quite amazed by the device, as was I with their level of enthusiasm and engagement. When I used the device with my students, I also noticed that they were having many more opportunities to work on the targets that we were working on than the other activities that I might use (e.g., flash cards etc.).

As for Mackenzie, I knew right away that it would become a valuable tool for her as well. She was just as interested and engaged with the activities that I was using on the iPad as my students.

The value of the iPad as a learning tool became more apparent over time, especially once I became more familiar with how to use and integrate it to support the goals that we were working on. The other key component was the apps that were being developed. As time went on more and more apps were being developed specifically for the purposes of S-LP practice. Of course there are a number of other apps that were not developed for that intended purpose, such as the Toca Boca apps, but put in the hands of a creative S-LP it’s quite obvious how they could be used to support a number of speech-language goals.

What do you feel is the future of the iPad as a tool to assist children with disabilities?

My feeling is that the iPad will continue to be a valuable tool to assist children who have special needs. The great thing about Apple is that they listen to their customers and use suggestions and ideas to improve their products to meet the identified needs. One example of that commitment is the introduction of the Accessibility Features and the more recently announced feature from the WWDC of the Guided Access option that will be available in iOS6.

What apps you would recommend for parents that have children with autism? What are some online resources you’d recommend?

There are a lot of great apps out there to support the learning of children who have Autism Spectrum Disorder. However, it’s really difficult to recommend apps based on disorder area. In order to recommend specific apps, it would be necessary to know about the individual’s strengths and challenges, as well as goals and learning that the app would be used to support. There is certainly no one-size-fits-all approach when it comes to what apps are useful for children who have ASD or any other special needs.

Parents who are looking for app suggestions should consult with the professionals that would best know their child, so that the most appropriate recommendations are made to fit the specific needs of the child and his/her learning.

Is there any other information you’d like to provide about using the iPad?

Certainly, I have some favorite apps and app developers. Some of these are listed on my TiPS blog (HiP Picks from TiPs 2 of 2 is still pending). The information on that blog is specifically related to speech-language intervention and practice and as such the apps that are included are considered in that context. I also collaborate with 4 other S-LPs on the blog TherapyApp411. That blog is one in which we review apps and talk about how they can be used/integrated in the context of speech-language therapy.

It’s really exciting to be part of a time when the technology is evolving so rapidly and proving to be useful to support the learning of children who have special needs. This iPad has proven to be a very valuable tool for me again and again, both in my professional work and also in my personal life at home as I strive to support an incredible little girl with significant learning challenges. I feel so very fortunate to be living in time where I can benefit and take advantage of it.

Thanks Renena for your time! It’s just amazing what the iPad has become as a device that can really change people’s lives. If you want to learn more about her story, check out her published article in the Canadian Association of Speech Language Pathologists and Audiologists and also the American Speech and Hearing Association and also follow her on twitter.