This morning Apple announced iOS 10, which looks to be a very exciting release, blasting through just a handful of features. The beta version of iOS 10 is now available for developers, while the public beta will be out next month, following a widespread release for the masses this fall.

With every new iOS release, some devices are just too “old” to run these latest versions, due to their aging hardware. For iOS 10, the iPhone 4S no longer makes the cut (update: along with iPad mini, iPad 2, iPad 3 and iPod touch 5th gen), leaving the following 17 devices below that will run the new mobile OS, according to Apple: 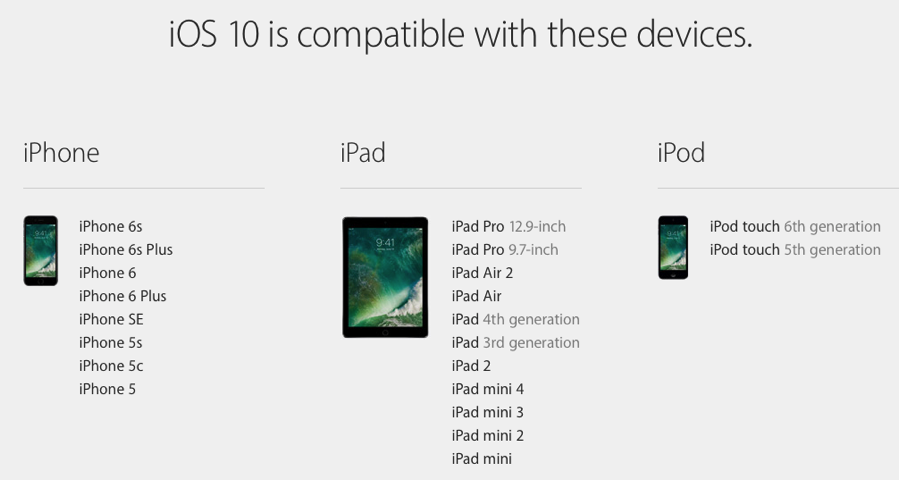 Update: this image is incorrect; check the updates below

Anyone still rocking an iPhone 4S out there? Even if iOS 10 was available on the device, I would imagine it would run pretty sluggish and be a horrible experience.

Update: Apple’s developer downloads page does not list betas for iPad mini, iPad mini 2, iPad mini 3 or iPod touch 5th-gen (thanks bb). We’ll keep an eye on Apple’s website to see if they update the page, or if more beta downloads appear.

Update 2: Apple has updated their iOS device compatibility list–gone is the iPad mini, iPad 2, iPad 3 and iPod touch 5th-gen. So it looks like the original information from the above was incorrect on Apple’s website.