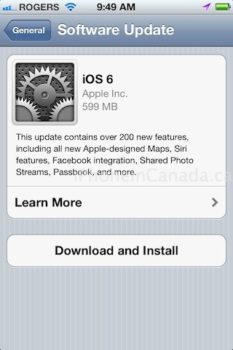 We’re hearing numerous reports iOS 6 has killed WiFi connectivity for some users. People are reporting they can no longer connect to their WiFi hotspots from their iPhone 4S, iPad 2 and iPad 3s.

Here are some possible fixes for this bug:

There’s a massive thread over at the Apple Support Communities about this issue. iOS 6 updates worked on our iPad 3 and iPhone 4S.

Did iOS 6 kill your WiFi connectivity? If you found a fix that worked for you, share it with us in the comments.

Update: It appears the bug was not related to iOS 6, rather Apple’s “captive portal” page being down. It now appears to be working so try your WiFi again (thanks @lieven)

Apple announced this week its Maps team will be driving and walking across six Canadian cities next week. The Apple Maps team will be in Toronto, Montreal, Calgary, Vancouver, Edmonton and Ottawa from Monday, August 8, 2022. Apple says they will be “driving vehicles and wearing specialized backpacks with equipment to help us build the...
Gary Ng
36 mins ago