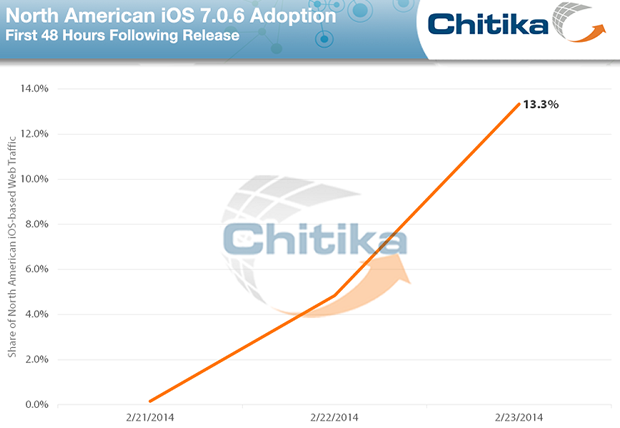 Chitika Insights has noted that iOS 7.0.6, which was recently released to address a critical security issue, has hit 13% adoption rate in North America just two days after its debut, CNET is reporting. The latest version of iOS accounted for 14.5% of ad impressions on the iPhone and 12.3% on the iPad according to Chitika’s latest findings, resulting in an average of around 13.3%.

“iOS 5.1.1, which also delivered a security patch, took around three weeks to reach a 58 percent adoption rate on the ad network. Chitika expects 7.0.6 to reach that number in a shorter period of time”.

iOS 7.0.6 was released by Apple last week to fix a security hole that would allow an attacker to access and modify data supposedly protected by SSL. While the initial two-day adoption rate of iOS 7.0.6 was not as high as it was for iOS 7, Chitika says that the majority of iOS users are expected to be running the latest update within the next week.

Following the latest iOS update, the evad3rs also released an update to their iOS 7 jailbreak tool evasi0n7, taking it to version 1.0.6 with support for the newly released iOS 7.0.6.