Apple’s App Store Distribution page has been updated to reflect over 80 percent of devices are now running iOS 8, based on App Store data ending April 27, 2015. 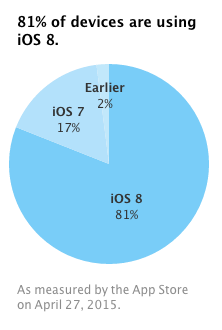 iOS 8 now sits at 81%, while iOS 7 users are at 17%, with 2% of users using older versions. These rising numbers were most likely assisted by Apple Watch, as users with iPhone 5 or higher are required to install iOS 8.2 or higher to use the new smartwatch.

To put these numbers into perspective compared to Android, only 5% of its users are running its latest version Lollipop 5.0, while only 0.4% are running the latest 5.1 update.