According to Chitika, iOS 7 adoption rates on the iPhone and iPad are all high levels ahead of WWDC 2014, based on their latest Chitika Insights study:

With iOS 8 expected to be at least partially unveiled at next week’s Apple Worldwide Developer Conference (WWDC), we revisited overall iOS version distribution on each respective device type. Expectedly, the latest data indicate continued usage share growth for iOS 7 across both iPhones and iPads in North America.

To quantify this latest study, Chitika Insights analyzed tens of millions of U.S. and Canadian iOS-based online ad impressions generated from May 22 through May 28, 2014. The results were then split into OS version distributions for iPhone and iPad users, respectively.

Chitika’s findings have concluded iOS 7 web traffic from the iPhone accounts for nearly 90% of USA and Canadian web traffic, a jump of 5.4% compared to their similar study back in February: 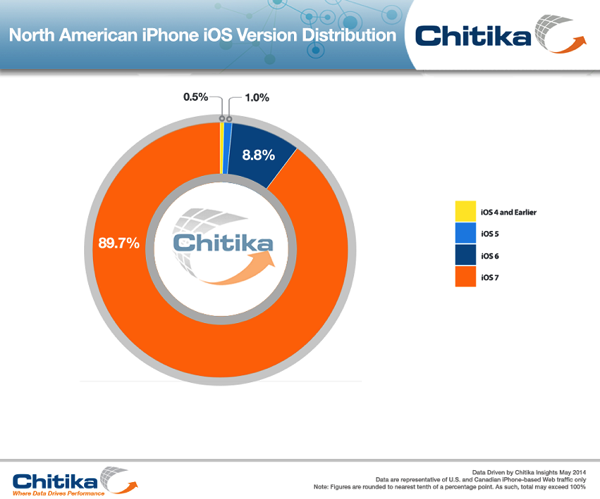 When it comes to the iPad, the same stat is at 85%, an increase of 6.3% compared to their February study. 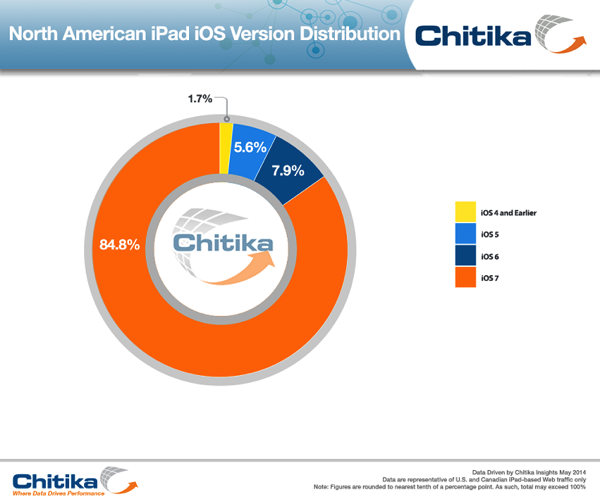 The ad network says the same study completed last year before WWDC 2013 resulted in iOS 6 showing 92.7% of iPhone web traffic, while 82.9% for the iPad; iOS 6 had been available for 8 months at the time.

According to Apple’s App Store Distribution page, 88% of devices are running iOS 7 as of May 18, so Chitika’s stats are relatively close to official numbers. 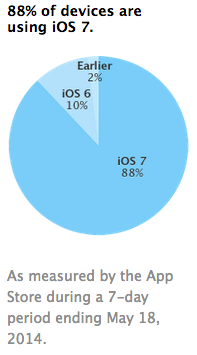 Apple is set to kick off its WWDC 2014 keynote on Monday, June 2 at 10AM PDT, which will be streamed live again for the masses. We’ll be providing updates on Twitter and here, so stay tuned.