Apple has updated its App Store Developer page to indicate adoption of iOS 7 has reached 79 percent of devices based on App Store usage, as of January 12, 2014. Users with iOS 6 on their devices have remained at 18 percent. 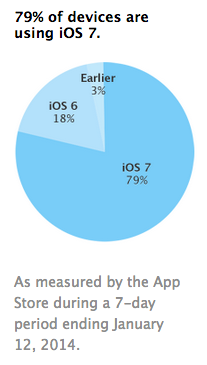 Back in late December, this iOS 7 adoption rate had reached 78 percent, up from the 74 percent rate back in the beginning of last month.

To put these numbers into perspective, last week Google updated its Android distribution rate to note only 1.4 percent of users have the latest KitKat 4.4 software installed; the data was collected within a seven day period ending January 8, 2013.

iOS 7 was released back in September and early estimates saw a 35 percent adoption rate in under 24 hours. Last month Chitika reported 74 percent of iPhones in Canada and the USA were powered by iOS 7, based on their web and advertising analytics data.