9to5Mac’s Seth Weintraub claims to have personally seen an early beta of iOS 7 and describes the revamped operating system has a ‘skinny jeans’ look and a flat feel. Unable to post actual screenshots as Apple embeds watermarks to identify sources of leaks, Weintraub has posted mockups describing what iOS 7 entails.

The beta he saw had two colour schemes for numerous apps, one darker and one lighter, which could be related to the icons themselves adjusting to ambient light as we’ve seen with the iPod’s volume knob in iOS 6.

When in “Black mode”, the keyboard is black with gray letters. In “white mode”, gray keys with white letters – a little like Android.

We’ve heard that maps has a new walking directions functionality. Also, grouped table views no longer have spaces on the left and right now – rounded rectangles give way to more rectangular like the Twitter app UI update.

On Airdrop, we’ve now heard “the share menu has a sideways scrollable row on top of the device and and computer airdrop photos like the circles with a pic of them”. The next row has sharing services Facebook, Twitter, Flickr and Vimeo. Next row has copy/paste/cut/etc.

Here is the mockup of the new icons for various Apple apps:

Below is a mockup of the homescreen. Notice the antenna signal bars are gone and replaced with small dots. The dock is no longer there and has been replaced by a transparent line. Check them out below and tell us what you think. 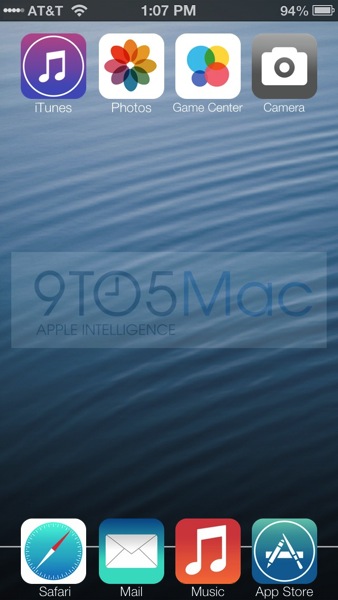 Earlier today the WSJ confirmed iOS 7 would have a new look with plain backgrounds and also said Apple would launch its iRadio service tomorrow.