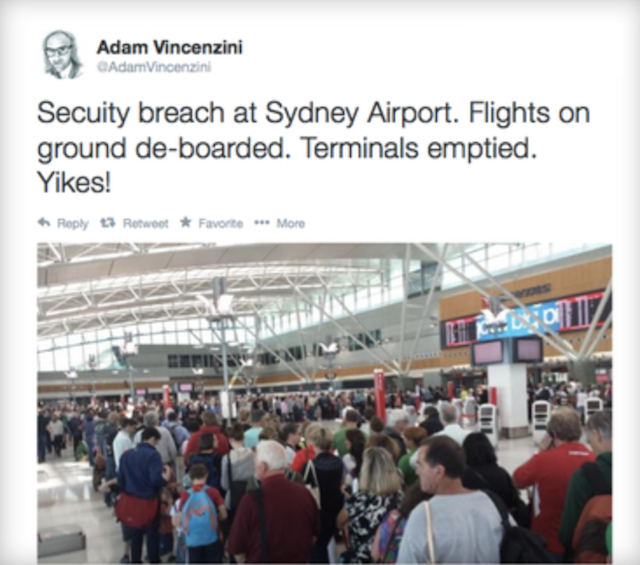 According to an interesting report by CNET, a man got off a plane at Sydney Airport in Australia and was so enchanted by the fascinating content on his iPad that he walked into a domestic terminal without bothering to go through security. This event was captured on CCTV, seeing which the officials got panicked and evacuated the passengers from the terminal.

“The man found himself (or, perhaps, didn’t) going into the terminal through an exit passage that clearly was convenient for him, but less convenient for the hordes of passengers who not only had to be removed from Terminal 3, but also re-screened.

A spokeswoman for Qantas told the Morning Herald: “The man disembarked a flight and left. It appears he wasn’t paying attention, was looking at his iPad, forgot something and walked back past (the security area).”

The report adds that the man, who has not been publicly identified, left the airport without further harm being done. Flights were however delayed for around an hour.

One wonders though, whether the passenger really needed to be staring at his iPad quite so intently. What do you guys think?

Amazon today announced at its special event an update to its best-sounding Echo speaker, the Echo Studio. This speaker is now available in Glacier White, joining Charcoal, while it also gets some enhanced audio technology updates, that will be available for all existing and new users. New custom spatial audio processing technology and frequency range […]
Gary Ng
5 mins ago

Apple's new Crash Detection feature, available on iPhone 14 and the company's latest Apple Watch models, is designed to automatically contact emergency services in the event of a severe car crash.  However, it can sometimes mistake a rollercoaster ride for a car crash (via Reddit). One Reddit user found this out the hard way when...
Nehal Malik
22 mins ago

Amazon announced on Wednesday a new lineup of Fire TV Omni televisions, this time with QLED and also its “smartest TV lineup ever.” The new Fire TV Omni QLED Series is available in 65 and 75-inches, with 4K Quantum Dot Technology (QLED) displays and full-array local dimming for up to 96 zones. Dolby Vision IQ […]
Gary Ng
25 mins ago