Bring Your iPad to the Microsoft Store, Get Office 365 for Free [u]

Today has been a big day for Microsoft—only because Office has launched for the iPad and Office for iPhone is now free for home use. 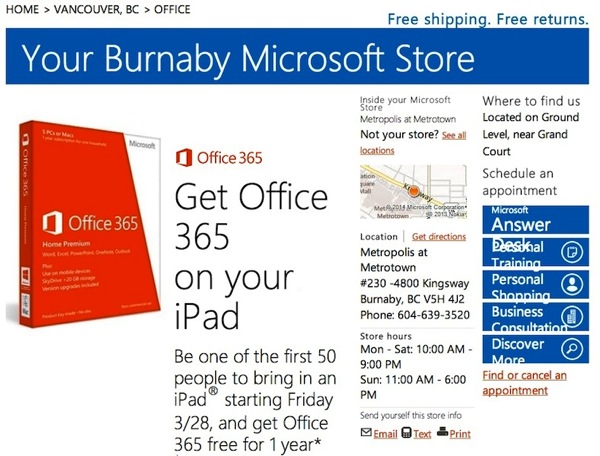 The promotion is also available at the following Canadian locations in Edmonton, Vancouver, Mississauga, and Toronto

The fine print is below—note you will need to participate in the “Put My iPad to Work” social campaign, so be ready for whatever that is:

*Valid March 28, 2014 until March 30, 2014, or while supplies last. Limited quantities available. Available in select Microsoft retail stores in US (including Puerto Rico) and Canada. To be eligible, customer must participate in the “Put My iPad to Work” social campaign.” Additional Office 365 Home Premium terms may apply; See http://office.microsoft.com. Not valid on prior orders or purchases; cannot be transferred or otherwise redeemed for cash or gift cards. Not combinable with other offers. Price discount does not include taxes, shipping or other fees. Void where prohibited or restricted by law. Microsoft reserves the right to modify or discontinue offers at any time. Limit 1 per customer.

Apple confirmed to Re/code they will be getting the standard 30 percent cut from all in-app Office 365 subscriptions. The following statement was released which also touted other iPad productivity apps:

“We’re excited that Office is coming to iPad — now part of the more than 500,000 apps designed specifically for iPad. iPad has defined a new category of mobile computing and productivity and transformed the way the world works,” Apple said in a statement. “Office for iPad joins an incredible lineup of productivity apps like iWork, Evernote and Paper by FiftyThree, that users can choose from to inspire them to do more with this powerful device.”

Welcome to the #iPad and @AppStore! @satyanadella and Office for iPad

Thanks @tim_cook, excited to bring the magic of @Office to iPad customers #cloud4mobile

If you watched Nadella announced Office for iPad in his first on-stage appearance as CEO, he did seem much more composed compared to former CEO Steve Ballmer. Although he did ramble on for about 9 minutes before presenting the Office for iPad demo, overall he seems very likeable and carried himself well.

Office for iPad is generating more excitement and buzz than the same software on Microsoft’s own Surface tablets and Windows smartphones. Go figure.

Update: The cheapest way to get Office 365 is via Amazon.com, as it’s available for $67 for the year (versus $99). It’s also available for shoppers ‘outside the U.S.’ so Canadians can jump on this and save.

Update 2: Here’s what you need to do to get your free Office 365 subscription at the Microsoft store, according to commenter Angelus:

Just got office 365 for free from the Eaton centre microsoft store. They make you take a photo holding your iPad and you need to share it. Pretty worth it for a free year of office for 5 users.