The folks at Chipworks have provided the first teardown of the A9X processor found inside Apple’s iPad Pro. Chipworks discovered that Apple has created another impressive chip when it comes to design, which should, again, make Intel take notice.

The A9X is an extremely powerful chip, which can even top the performance of some laptops powered by Intel chips. However, the A9X is a lot bigger than the A9 processor found in the iPhone 6s. 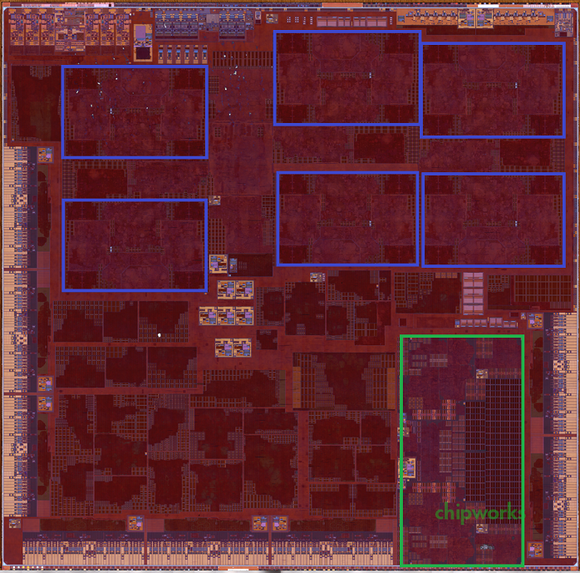 They found that the A9X is a lot bigger than any mobile chip that has ever powered an iOS device, and is actually 40% larger than the A9 processor in the iPhone 6s.The A9X, which can be seen in the die-image above, features two CPU cores and a 12-cluster GPU.

“Chipworks’ Dick James tells me that he sees a 12-cluster GPU, two CPU cores, and an absence of the level-three cache memory found inside the A9 chip (I’ll explain why I think Apple didn’t include it later in this article). I agree with his assessment. The two CPU cores can be seen in the green box, and I believe that inside of each blue box are two GPU clusters, for a total of 12 clusters.”

What are your thoughts on the A9X and Apple’s advances in chip design? Do you think Intel has a reason to worry? Let us know in the comments below.