Apple got a lot of things right with the iPhone 13 and iPhone 13 Pro — including surprisingly great battery life for all available models.

As with any new smartphone release, one of the most important specs to keep an eye on is battery life. It doesn’t matter if a phone has the fastest processor, biggest display, or fanciest design. If its battery can’t make it through a regular day of use, all of those things are for naught.

What kind of battery life can iPhone 13 users look forward to? In short, according to a new battery report from Anandtech, it’s some of the best battery endurance ever seen on an Apple handset.

One of the biggest tech improvements on this year’s devices is the addition of ProMotion to the iPhone 13 Pro and Pro Max models, which is essentially a high refresh variable rate display achieving up to 120Hz, allowing the models to use less power.

All the new phones showcase extremely large generational gains compared to their predecessors. For the iPhone 13, the study found results that are 34% better than the iPhone 12, which exceeds the +14.6% battery capacity increase. The new SoC efficiency as well as increased display power efficiency would explain the remainder of the difference. 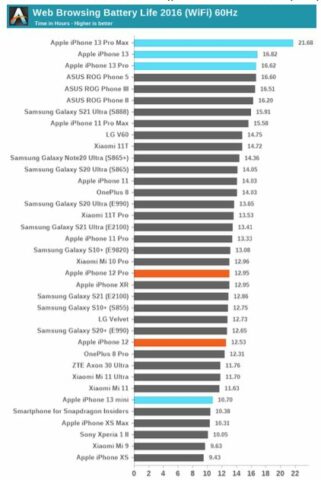 Check out the entire battery report over at Anandtech.