Those who made iPhone 5c pre-orders just after midnight PDT on September 13 should have received notification emails from Apple stating their case orders have shipped. Despite cases initially stating shipping times of 1-2 weeks during checkout, they have shipped simultaneously first.

Our blue iPhone 5c pre-order made via the Apple Store iOS app has shipped alongside its white case and is expected to arrive on September 20, the day of both new iPhone launches. is still processing. 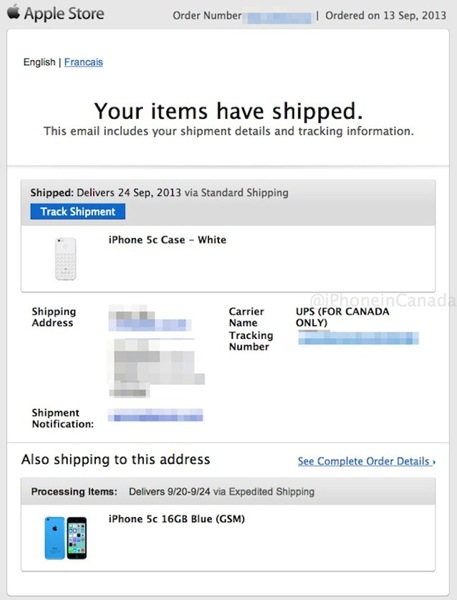 As of writing, Apple.ca still has every single colour of the iPhone 5c pre-order stock on hand, as no shortages have loomed yet. This is an indication Apple is well prepared for its iPhone 5c launch or it could mean demand for the new polycarbonate iPhone has been lower than expected, as previous iPhone pre-orders have resulted in sellouts of initial batches.

Has your iPhone 5c pre-order and case from Apple shipped yet?

Update: we’re blind—only the case has shipped with a tracking number, the phone is still processing.