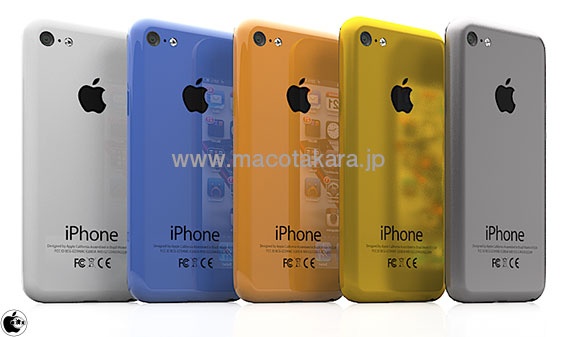 Apple is apparently looking to diversify its colour range, at least for the iPhone line, according to the latest rumours shared by Macotakara. Both the iPhone 5S and low-cost iPhone are rumoured to be available in multiple colours for the upcoming release.

However, Macotakara has obtained information from several sources which name different colour choices for the low-cost iPhone. Possible colour options are navy, gold orange, white and gray, while the second source named pink, green, white, blue and yellow orange. Although the reports differ, there is one common theme: none of them mentions the availability of a low-cost iPhone in black.

Also, regarding the low-cost iPhone, Macotakara’s sources say it will enter into trial production in June, with roughly 1,000 units scheduled. Mass production will begin in July just in time for September shipment.

Macotakara also has information about the anticipated iPhone 5S. Its sources don’t confirm the fingerprint sensor, but report the three new colour choices and the possible dual-LED flash. Also, while the design is expected to be similar to the iPhone 5, sources say the rear microphone hole will have a circular shape and will be placed between the iSight camera and the flash.

The blog entry also addresses the iPad 5. The rumour mill reports that the extra hole that has been seen in some iPad mini prototype cases will be featured in the anticipated tablet. This, according to Macotakara, will be the hole of an additional microphone.

Although the site points to a September shipment date, there is no data about the release date of the iPhone 5S, nor for the low-cost iPhone. What seems to be certain though — according to the blog’s sources — is that the iPad 5 will ship after the new iPhone is launched.