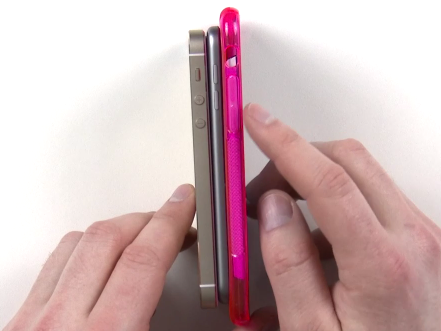 In this video I compare this 3rd party “iPhone 6” case with the current generation iPod Touch. If this case turns out to be accurate, we’ll be seeing a very thin iPhone 6.

The purpose of the video is to imagine what the rumoured iPhone 6 would look like based on the thin and curved design of the current iPod touch. Right now, the iPad Air, Retina iPad mini and iPhone 5c all sport curved designs.

As you can see from the video the volume rocker buttons of the alleged iPhone 6 case resemble the buttons from the current iPod touch, iPad Air and Retina iPad mini.

With the inevitable retiring of the iPhone 5/5S design—will Apple move its next phone to match up the iOS device line up? We would think so.

Or, maybe this case leak is actually for the next generation iPod touch, which would probably have the same rumoured larger screen size as the iPhone 6.

The current 5th generation iPod touch design launched in the fall of 2012, alongside the iPhone 5—with the same screens. It’s been four long years since a form factor change so one is certainly due. The wait from the fourth gen iPod touch to fifth gen was only two years.

Twitter Blue has once again been working on bringing its edit button to the fold. In a new tweet, the premium subscription of the social media platform shows off how the edit function will work both in terms of the user tweeting as well as the general audience seeing the changes. Earlier in September, Twitter...
Steve Vegvari
26 mins ago