A new part of the alleged iPhone 6 schematics, leaked millimeter by millimeter by the Chinese GeekBar, presumably shows the next-generation co-processor, codenamed “Phosphorus”, which connects to the A8 processor via an SPI bus. 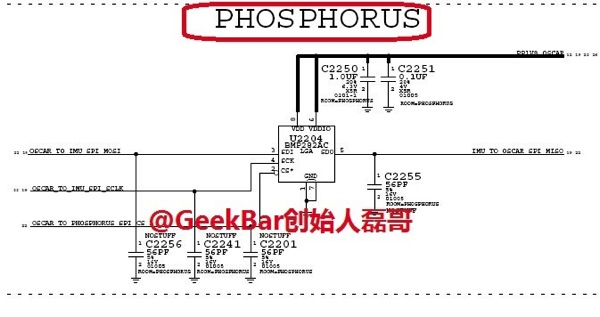 The guys behind GeekBar suggest that “Phosphorus” will be a sensor replacing the M7 coprocessor. What’s more important is that this chip will allegedly collect health data. The leak could add to what we already know about Apple’s plans regarding iOS: it will contain the Health app, and developers of health focused software and hardware will be able to make use of the new HealthKit API that will handle all health-related information. Apple introduced the new Health app that will be in focus with iOS 8 and its HealthKit API back in June at the WWDC.

Using the same alleged iPhone 6 schematics, the guys behind GeekBar have claimed that the next-generation Apple handset will feature an NFC chip manufactured by NXP, 1 GB of RAM, and a 128 GB option.

Like with every rumour, we take this leak with a grain of salt, especially because while browsing previous-generation iPhone schematics we’ve found hints that it is very easy to “help” these schematics uncover new information.