iPhone 6s Online Reserve and Pick Up Reopens Sept. 26 at 8AM

During Apple’s iPhone 6s pre-orders, the company made Reserve & Pick Up available within the Apple Store iOS app. This allowed for customers to pick up their configuration in-store for unlocked or contract purchases, instead of waiting for delivery. This was still working as of last night, but as of this morning, it has been closed: 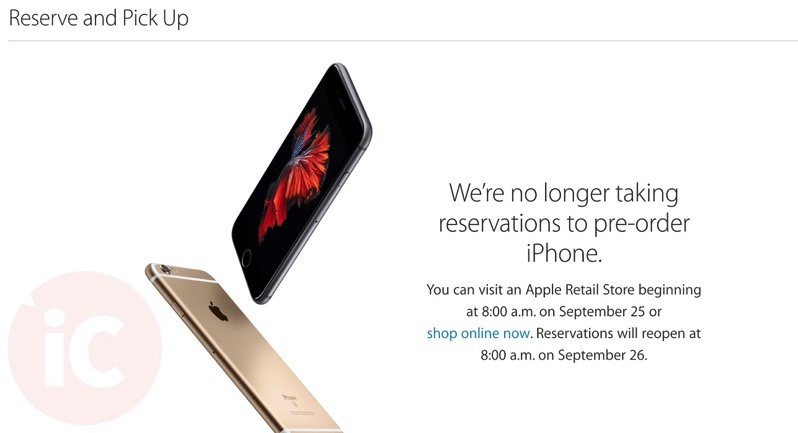 This morning, as part of the company’s reaffirmation of this week’s iPhone 6s and iPhone 6s Plus launch (and iOS 9 adoption hitting 50% of devices), Apple also announced Reserve and Pick Up would start on September 26 in Canada, available on the web (like last year’s iPhone 6 launch):

Beginning September 26, customers will be able to visit Apple.com/ca to reserve their iPhone for pick-up at their local Apple Store, based on availability. Most Apple stores will also have iPhone available for walk-in customers each day.

The traditional Reserve and Pick Up link is here, and should go live on Sept. 26 at 8AM local time. Apple also states stores will also have iPhone 6s stock on hand for walk-in customers as well.

As of last night, when the Reserve and Pick Up option (and web link momentarily) still worked, only the iPhone 6s was showing available in stores.

The first iPhone 6s and iPhone 6s Plus pre-orders have already shipped and are making their way to their final destinations for Friday’s launch. Click here to find out how to get your UPS tracking number and read our iPhone 6s launch guide here.