Apple has announced that with iOS 9 they have recorded the fastest mobile operating system adoption to date, with more than 50% of devices already using iOS 9, as measured by the App Store on September 19, 2015. The company also reminded customers about the availability of the iPhone 6s and 6s Plus: The recently announced devices will be available for purchase starting this Friday at 8:00 a.m. local time. Apple encourages walk-in customers to arrive early to grab their preferred handset.

“Customer response to the iPhone 6s and iPhone 6s Plus has been incredibly positive, we can’t wait to get our most advanced iPhones ever into customers’ hands starting this Friday,” said Philip Schiller, Apple’s senior vice president of Worldwide Marketing. “iOS 9 is also off to an amazing start, on pace to be downloaded by more users than any other software release in Apple’s history.” 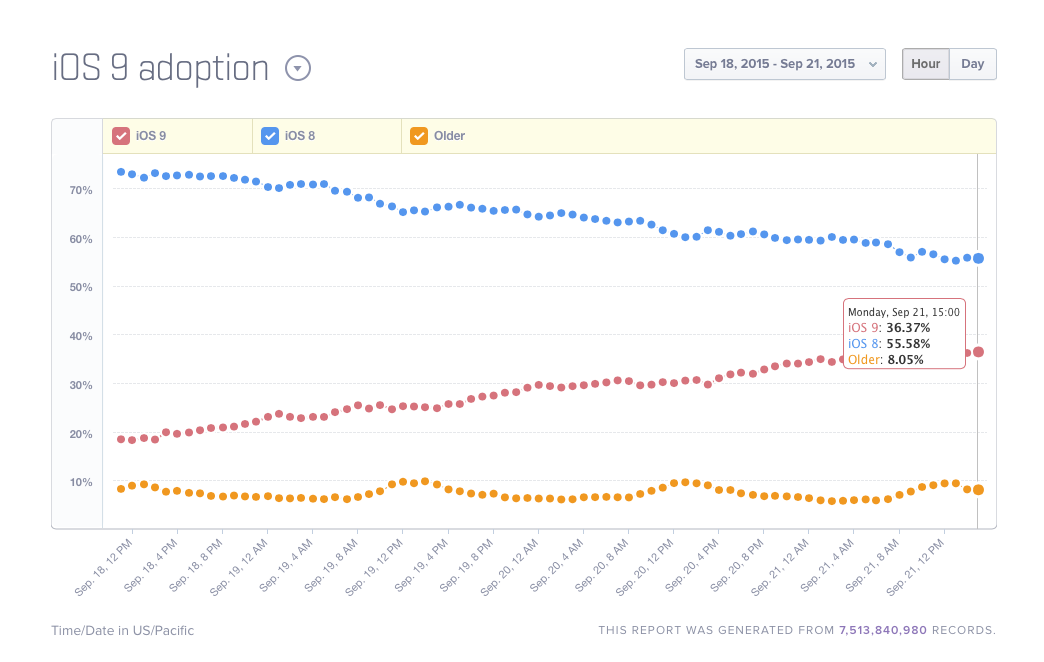 Apple’s iOS 9 adoption numbers are much higher than those registered by Mixpanel, which suggests that there is a lag in their chart: As of September 21, Mixpanel recorded only a 36.7% adoption rate.

By the way, Apple’s 50% iOS 9 adoption rate compares to iOS 8’s 87% recorded on September 14, just five days before the most recent data.

The iPhone 6s and 6s Plus also bring the new iPhone Upgrade Program – currently limited to the US – which allows customers to get a new iPhone annually and AppleCare+. Monthly payments start at $32 (US) and $37 (US), respectively.

The latest handsets will be available in 12 countries at launch: Australia, Canada, China, France, Germany, Hong Kong, Japan, New Zealand, Puerto Rico, Singapore, the UK, and the US. Starting this Saturday, September 26, customers will be able to visit Apple’s official website and reserve their iPhone for pick-up at their local Apple Store, based on availability, but most stores will have devices in stock for walk-in purchasers.