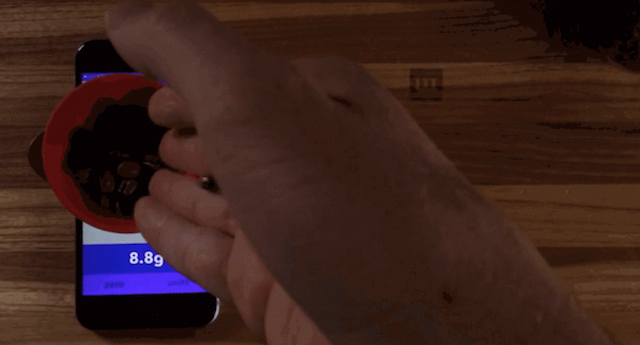 While Apple doesn’t allow it yet, the iPhone 6s / 6s Plus devices seem to have the ability to work as digital weighing scales, as explained by developer Ryan McLeod in an interesting post on Medium (via The Verge).

The developer and his friends successfully built a digital scale app for the new iPhones by taking advantage of Apple’s new pressure sensitivity 3D Touch feature. McLeod says he was inspired by all the “creative workarounds” on the App Store to hijack 3D Touch for uses other than quickly accessing app shortcuts from the home screen.

One of the first problems he and his team faced was that Apple’s 3D Touch API measures weight on a custom scale from 0.00 to “maximum possible force,” with 1.00 as the average touch. They solved this by asking users to calibrate the app using objects of a known weight they would have to hand (US nickels). Then there was the problem of getting the screen to recognize touch input. “We needed an object that was conductive, had finger-like capacitance, formed a single finger-like touch point, was a household item, and could hold items to be weighed,” writes McLeod.

Their solution? A spoon. Users could balance objects on the spoon and get, well, not a completely accurate reading (and nothing heavier than the maximum weight of 385 grams), but something that was far better than no scale at all.

However, when the team submitted their Gravity app to the App Store, it was rejected “for having a misleading description”. They resubmitted the app with a video showing the app in action (below), but were then told on the phone by Apple that “the concept of a scale app was not appropriate for the App Store”, in the developer’s words.

As to why Apple is actually rejecting the app remains unclear. Whether the company is worried that people will break their screens if they use them as scales? What do you guys think?