Samsung is back at it again with a new smartphone, the Galaxy Note 7, which comes with a stylus, slightly smaller battery, 64GB of onboard storage and higher price, as its main differences versus the S7 Edge. 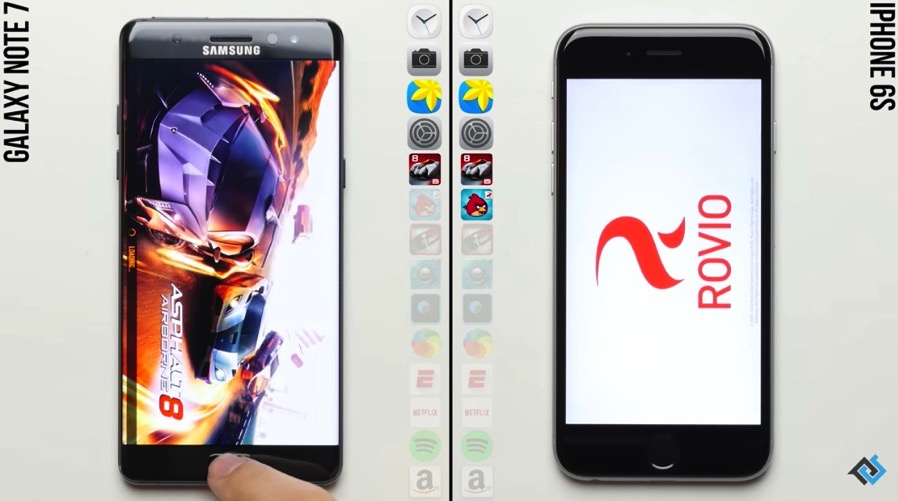 Just how does this new phone compare in a real-world speed test versus Apple’s iPhone 6s? YouTube channel PhoneBuff has released another one of their classic tests, and Apple’s iPhone 6s demolished the Galaxy Note 7, despite the latter having higher specs on paper.

How these tests work is each device launches apps and performs tasks in order, then re-visits each app again a second time to test multi-tasking, before stopping the stopwatch.

As you can see in the video below, the iPhone 6s and Galaxy Note 7 start off at about the same pace, but shortly afterwards Apple’s smartphone pushes further ahead of Samsung’s device in the tests. iOS 9 optimization is so good (coupled with Samsung’s Android bloatware?), the iPhone 6s laps the Galaxy Note 7 before it can even finish its first round of opening apps.

While the Galaxy Note 7 is powering a higher resolution display versus the iPhone 6s, it still could not win despite have double the RAM of the latter. Phone Buff noted the iPhone 6s has gone undefeated in its real-world speed tests during its life cycle on the channel, an impressive feat (last fall, the iPhone 6s also beat the Note 5).

PS – Oh, if you’re into drop tests—here’s the Galaxy Note 7 versus the iPhone 6s, also performed by PhoneBuff (the iPhone lost, as expected):