iPhone 7 Plus to Remain Limited During the Holidays: Analyst

According to Piper Jaffray analyst Gene Munster, the iPhone 7 Plus is expected to remain in short supply during the holiday shopping season as Apple is unlikely to reach a supply and demand equilibrium for its flagship smartphone by the end of the December quarter, MacRumors is reporting. 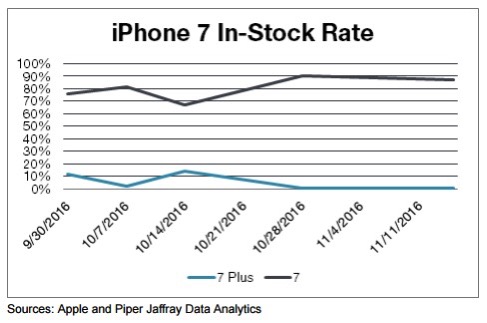 Last year, the iPhone 6s lineup was at 100% availability at this time. However, after checking 134 Apple retail stores in the United States for in-store iPhone 7 and iPhone 7 Plus availability, Munster has found only 47% of models are available for pickup right now compared to 40% a month ago. He also said that iPhone 7 and iPhone 7 Plus inventory in China continues to be more constrained than on Apple’s home turf.

iPhone 7 models remain more widely available than iPhone 7 Plus models by a significant margin. In a research note obtained by MacRumors, Munster said iPhone 7 Plus inventory remains constrained, with only 3% of SKUs available in the Apple retail stores he checked compared to 14% a month ago.

In China, Piper Jaffray found 16% total availability of SKUs at 96 China Unicom stores as compared to the 47% figure in the U.S.