Comparing the Camera on iPhone 8 Plus with the $9,000 Hasselblad X1D 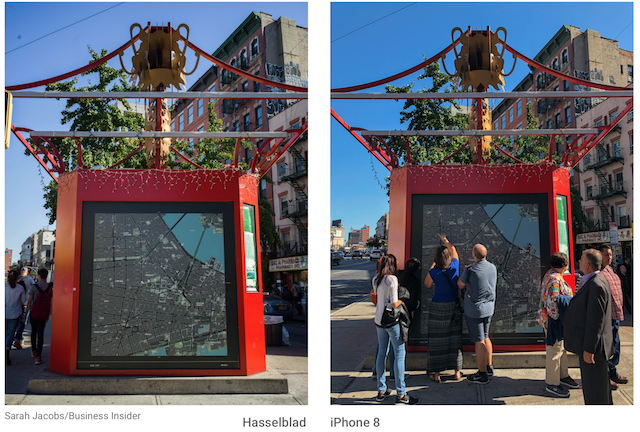 Although it sounds totally unfair comparing a $9,000 Hasselblad X1D digital medium-format camera capable of producing 51-megapixel image files with the camera on the iPhone 8 Plus that takes mere 12-megapixel photos, the folks over at Business Insider took the two gadgets out for a spin to find out how this incredibly expensive camera holds up when it comes to taking everyday, tourist-type photographs.

The photographer captured the vibrant colors and always-busy streets of New York City’s Chinatown, shooting in manual mode with the Hasselblad X1D. “I was using the 45mm lens, which costs $2,695 and has an aperture range that goes from f-stop 3.5 to f-stop 32”, he writes. Side-by-side photos taken by the two cameras show how the iPhone processes colors and the pixels differently from the X1D.

“The fact that such a high-quality, medium-format, mirrorless digital camera exists in an easy-to-carry camera body is, in my opinion, an industry game changer. The Hasselblad X1D is lightweight and has a simple control system, and its high-quality results are worth its asking price.

The iPhone 8 Plus, on the other hand, will do just fine in most well-lit situations. When it comes to those detail shots and nighttime tourist excursions, however, the iPhone 8 Plus won’t serve you as well as the Hasselblad X1D”.

The latest video from Mrwhosetheboss reveals some Samsung smartphones are suffering from a swollen battery issue. Samsung dealt with a Galaxy Note 7 fiasco in 2016, when batteries for the smartphone were catching fire worldwide. Now, it appears some older Samsung phones are seeing batteries swell up, even when off and in storage. The tech […]
Gary Ng
29 mins ago