Your Future iPhone May Alert You of Environmental Dangers

A new Apple patent filing published by the US Patent and Trademark Office (USPTO) titled “Electronic device with speaker enclosure sensor” details an embedded environmental sensor capable of sampling both gas and liquids, which may be integrated in future iPhones, Apple Watches and other iOS devices, warning users of potential dangers in their surrounding environment (via AppleInsider). 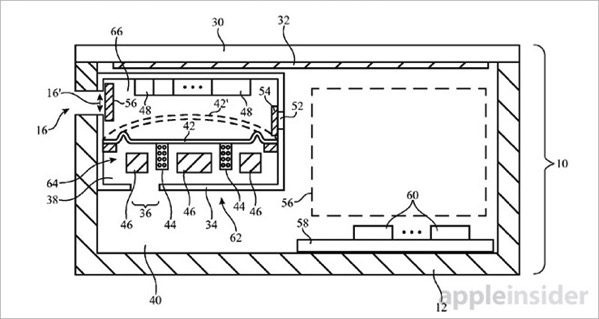 The application covers a method of integrating the environmental sensor into a device speaker cavity, where it can sample materials and also say moderately protected. Embedding such a sensor inside a mobile device is however not easy, since sensors capable of measuring air quality and other parameters require exposure to conditions not suitable to sensitive electronics. Apple suggests a hardware array for embedding the sensor, that includes a moving diaphragm in an empty cavity.

As the component is designed to weather the elements thanks to various vents, seals and other supporting features, it is an ideal fit for the proposed environmental sensor placement.

Apple says that environmental sensor data can be combined with readings from sensors like accelerometers, for more advanced alerts. The patent was first filed for in May 2015.