Apple released the iOS 14 update in September, which enabled users to add widgets to their homescreen. Naturally, many apps which gave customization option for the widgets quickly followed. According to new data, 15% of US iPhones have installed at least one app to customize their homescreen widgets.

Since iOS 14’s public release on September 16th, the five apps have seen a collective install count of 13 million. On September 21st, the apps witnessed a peak install count of 3.8 million installs. Sensor Tower reports that the apps have been installed 1.7 million times in November so far. Additionally, from a global perspective, there have been an estimated 45 million installs. 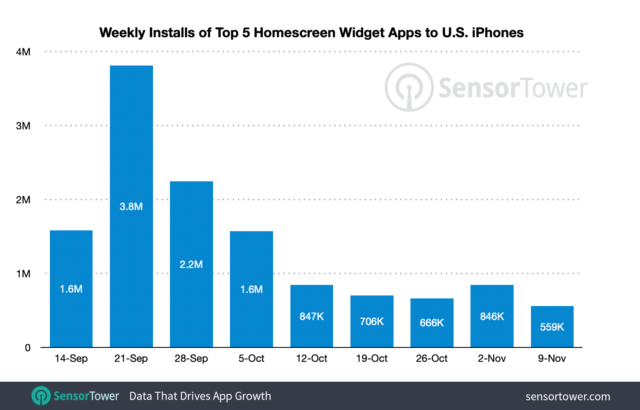 When looking at apps that offer replacement icons for the homescreen, Sensor Tower identified the most popular as being  Brass, App Icons, Icon Changer +, ScreenKit, and Icon Themer. Again, in the US, these apps collectively saw 1.6 million downloads since the iOS 14 launch. All apps with the exception of App Icons released after iOS 14 was publically available.

Sensor Tower’s research identifies a desire for iPhone users to have the customization features commonly seen on Android. The interest in developing new apps for homescreen customization is likely to follow as Apple continues to evolve the many options on iPhone and iPad.