How often do you use Google Maps on your iPhone? It’s one of my most used applications for finding directions and locating phone numbers of businesses etc. One of the features I’ve been waiting to try out was “Live Traffic”. The USA has had this feature for the longest time but it now looks like it’s working in Canada!

1. Launch Google Maps
2. Click on the ‘flip page’ icon in the bottom right. Click “Show Traffic”.
3. Voila! Now zoom in or out based on your location and you will see live traffic updates.

Google Maps Bonus Tip: Tap the screen with two fingers to zoom out.

If you haven’t figured it out by now, red means congestion, yellow/amber means partial congestion, and green equates to all clear. I wonder how well it works…time to test it out! Who wants to drive to a “red” zone and let us know how accurate this is? 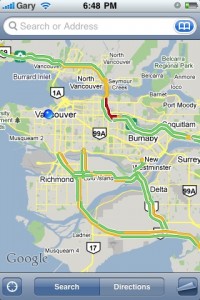 Live Traffic is working here in Vancouver and thanks to the power of twitter, I received confirmations from the following cities: Ottawa, Edmonton, Toronto, Montreal, and more. It’s only going to be a matter of time before Street View in Canada goes “live”. Thanks Google!