iPhone May Overtake Android In The U.S. By 2015 Due to Customer Loyalty 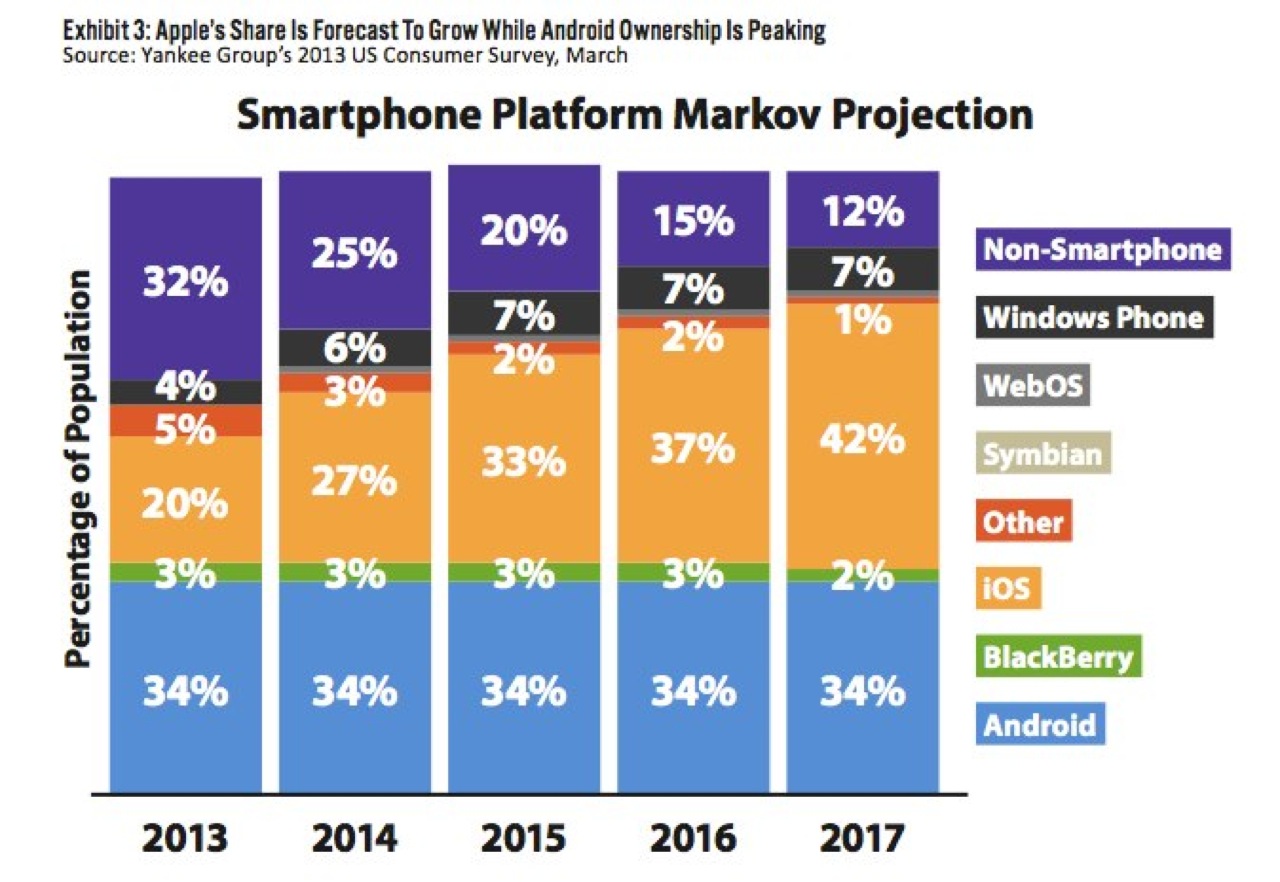 According to a survey of 16,000 consumers polled over the past 12 months by Yankee Group, customer loyalty will push iPhone ownership in the U.S. past Android devices by the year 2015 (via AllThingsD). The survey revealed that 91% of iPhone owners intend to buy another iPhone in the next 6 months, while 6% plan to switch to an Android device with their next purchase i.e over 9 out of 10 iPhone owners are loyal to the platform.

On the other hand, 76% of Android owners intend to buy another Android phone while 24% of Android phone users plan to switch to another platform, out of which 18% plan to buy an iPhone. On the contrary, merely 6% of iPhone owners said they plan to switch to Android. The source notes that when you apply this asymmetry to first-time smartphone buyers, two-thirds of whom plan to buy either an iPhone or an Android phone, iPhone ownership seems to surpass Android ownership in the U.S. by 2015.

“Think of the Apple and Android ecosystems as two buckets of water. New smartphone buyers — mostly upgrading feature phone owners — fall like rain into the two big buckets about equally, with a smaller number falling into Windows Phone and BlackBerry buckets. However, the Android bucket leaks badly, losing about one in five of all the owners put into it. The Apple bucket leaks only about 7 percent of its contents, so it retains more of the customers that fall into it. The Apple bucket will fill up faster and higher than the Android one, regardless of the fact that the Apple bucket may have had fewer owners in it to begin with.”

WhatsApp has finally introduced a new feature that makes it easier to message yourself, by allowing you to send notes, reminders, and shopping lists to yourself for easy access (via TechCrunch). The feature called ‘Message Yourself’ is set to reach all iPhone and Android users in the coming weeks. The feature was previously being tested by select beta users,...
Usman Qureshi
1 min ago

Apple has shared a handy new tutorial on its YouTube support channel, detailing how iOS 16 lets you use a Memoji sticker as your profile picture in Contacts. You can easily create a Memoji in iOS to match your personality and mood, and then send it in Messages and FaceTime. With a compatible iPhone or iPad...
Usman Qureshi
16 mins ago

In a series of tweets posted today, Twitter CEO Elon Musk has accused Apple of hating free speech in America as the company has seemingly stopped advertising on the platform. "Apple has mostly stopped advertising on Twitter. Do they hate free speech in America?,” Musk tweeted. He followed up with another tweet mentioning Apple CEO...
Usman Qureshi
26 mins ago