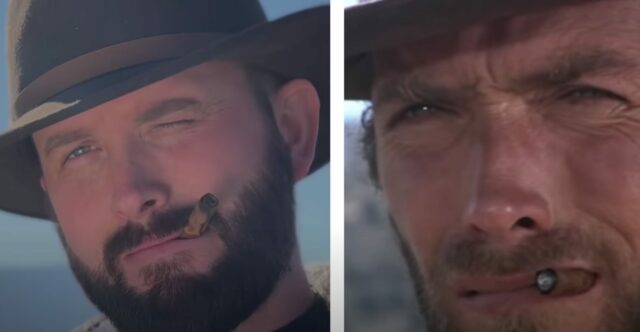 The first scene they recreated was the famous final showdown from spaghetti western classic The Good, the Bad and the Ugly, filmed in 1966.

They attempted to recreate the original conditions of the shoot as closely as possible, using a stable tripod to film the scene, just like the original scene was filmed.

The second scene they recreated was the iconic “Clever Girl” scene from 1995 blockbuster Jurassic Park. In the middle of filming, the motor on the gimbal couldn’t support the weight of the iPhone 13 Pro Max, forcing the YouTubers to put the phone’s stabilization to the test.

While both scenes came out surprisingly well, Walbeck was of the opinion that the iPhone 13 Pro Max is “not your number-one film making tool,” stating that they “felt the burden of shooting on the iPhone.” He found the editing software to be decent, but felt that many scenes felt unnatural and unauthentic.

Walbeck wasn’t impressed by Apple’s Cinematic Mode as it only shoots in 30fps, and also wanted the option to shoot in 4K.

However, for being a smartphone, Walbeck was quite impressed by the iPhone’s ease of use, stating that “no other phone can do that.”