The end of this week is going to be a busy one for Apple. There will be a press conference to address the iPhone 4 reception issue, plus iOS 4.1 beta has been released for Developers. One of the notable changes in iOS 4.1 is a change to signal bar graphics. Since Apple’s algorithms were “incorrect”, a visual change to signal bars are now in the upcoming iOS 4.1 update.

Here’s what MacRumors Forum member macduke came up with:

I took the images from 4.1 and compared them to my 4.0 iPhone 4. I then did an opacity comparison and used the marquee tool to select the areas of each and color the difference in green. This is the result that I got, after blowing up the image x 4 so its easier to see. They have effectively made the smaller bar twice as tall! As tall as the old 2nd bar. Wow:

So now when you have one bar of signal, it doesn’t look as “bad” as it should be. Yes, some iPhones are suffering from this issue (which are the only ones we hear about), but there are plenty of people who haven’t experienced this issue whatsoever. 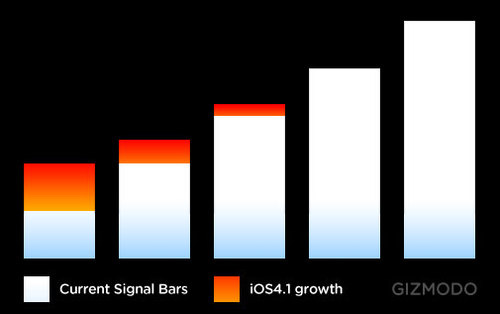 Engadget’s article here sums up this “reception issue” quite well:

So we’re doing what we can do: we’ve collected reports from every member of the Engadget staff who’s using the phone, as well as reached out to a variety of tech industry colleagues for their experiences. As you’ll see, most of our peers seem to be doing perfectly fine with their iPhone 4s, but the people who are having problems are having maddening issues in an inconsistent way. We’d say it all comes down to the network — particularly in New York City, where AT&T just completed a major upgrade — but even that isn’t a consistent factor in predicting experience. Ultimately, we just won’t know what’s really going on until Apple comes clean and addresses this issue (and the growing PR nightmare it’s become), but for now we can say with some certainty that not everyone is affected, and those that are seem to be in the minority.

I completely agree it comes down to the network. Rogers, Telus, and Bell have some pretty good networks in Canada. Most of the time if you’re having trouble with a phone, you’re going to complain about it. But if things are all peachy, you’re not going to go out of your way to brag about it online.

The fact of the matter is that there is a real issue with the antenna, no matter how you put it. We’ll find out on Friday what Apple has to say. Today is going to be a long day.