Apple has just reported its best third fiscal quarter ever, with 47.5 million iPhones sold in the three months ending June 30. But how about the US iPhone installed base? As it turns out, more half half of US users have an iPhone 6 or iPhone 6 Plus, a recent study published by the Consumer Intelligence Research Partners (CIRP) reveals.

The market research firm estimates there are about 97 million iPhones in use in the US. Of those, 33 million are iPhone 6, and 17 million iPhone 6 Plus units, as visualized in the chart below: 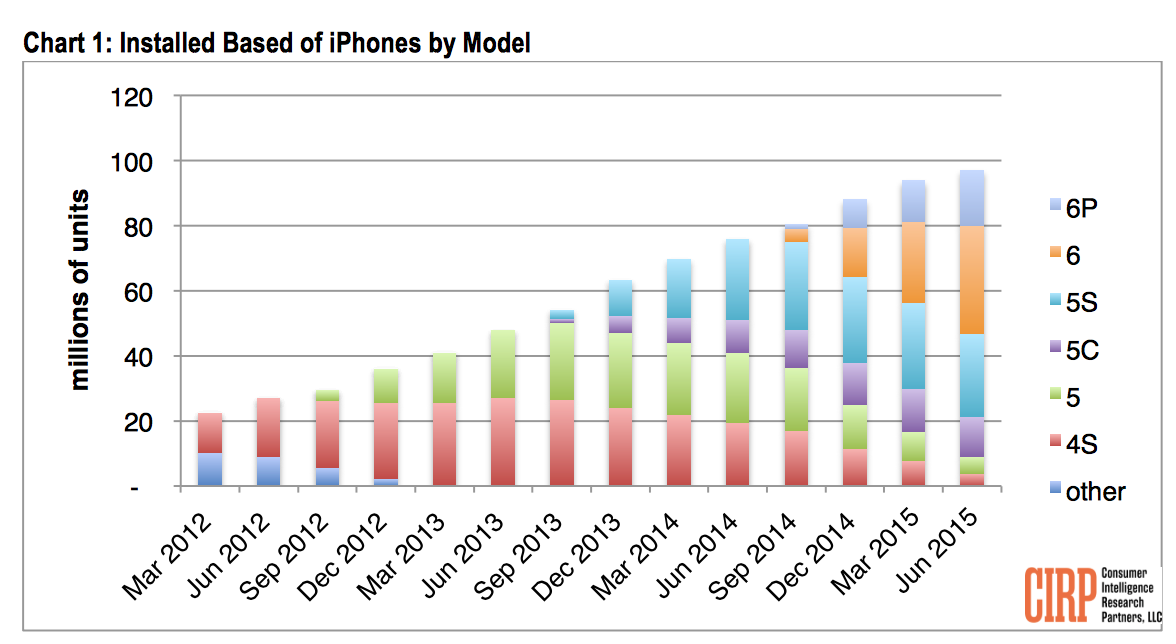 “In the quarterly investor call, Apple CEO Tim Cook said, ‘27% of the installed base of customers prior to the launch of 6 and 6 Plus have now upgraded,’ said Mike Levin, Partner and Co-Founder of CIRP. “Our estimates indicate that 52% of US iPhone owners use an iPhone 6 or 6 Plus. Relative to the installed base of about 80 million users at the launch of the iPhone 6 and 6 Plus, we also estimate that 49% of the installed base at the time of the launch have now bought an iPhone 6 or 6 Plus. So, we suspect a much larger number of iPhone owners outside the US remain possible upgraders, contributing to the 27% figure.”

This means the iPhone installed base has grown 9% per quarter for the past eight quarters, CIRP says. However, in the last quarter, the installed based grew 3% compared to 9% recorded the same period a year ago.

As a result, CIRP recorded a slowdown in iPhone installed base growth, since the number of first-time buyers is slowly diminishing, and Apple has to attract Android customers to grow, they say.