iTunes Connect has notified developers the service will shut down for the holidays from December 21-27. This means no app updates, price changes or app approvals will be made during this period. Expect your favourite apps to go free or on sale prior to the shutdown which usually results in big rankings boosts when it’s all said and done.

During that time, iTunes Connect will not be accessible and you will not be able to submit any apps or In-App Purchases. Processing of any Newsstand Atom feeds will be delayed until after December 27. Sales and Trends reports via the Autoingestion tool will be available but may also be delayed.

Also, you should not schedule any pricing changes or apps to go live between those dates. Pricing changes scheduled to take effect in that date range will cause the app to become unavailable for purchase until after December 27. Similarly, apps scheduled to go live during that range will not be released until after December 27. 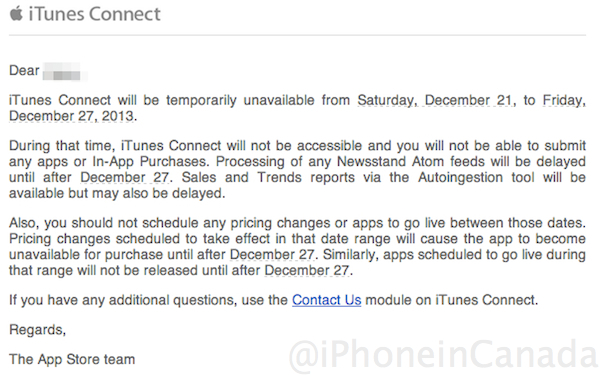 Last year, iTunes Connect shut down from Dec. 21-28, which is an extra day off compared to this year’s holiday period. We last saw a similar timeframe like this year’s back in 2010.