Back on January 7, Apple announced that the App Store has over 500 million active accounts, which triggered over 40 billion app downloads, with nearly 20 billion in 2012 alone, recording tremendous growth. But how much are users spending on average using their Apple ID? Horace Dediu of Asymco decided to find out.

Now, considering that the iTunes store has a colourful palette when it comes to digital content, what seems to drive the downloads is the number of apps. Apple has recently announced a contest to celebrate 50 billion app downloads (the total has surpassed 45 billion as of writing this article), with over 800 apps downloaded each second. The result: Apple has paid $9 billion to developers through the App Store, and that includes $4.5 billion in the most recent four quarters. 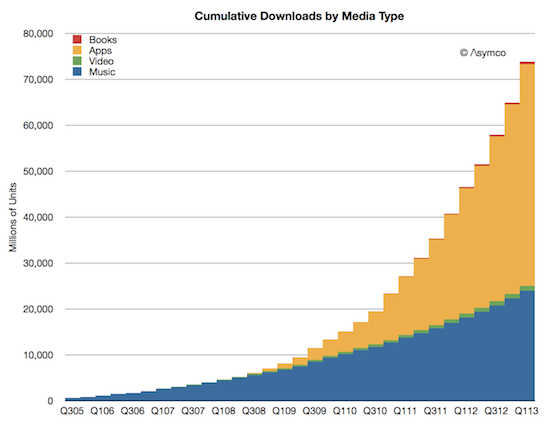 Dediu also points to the Canalys study, which says the iTunes App Store accounted for 74% of all app sales across the globe (despite Google Play closing the gap in terms of app numbers), and iOS app revenues more than doubled year over year.

After putting all these numbers together, Dediu concludes:

In March Apple reported that they have 500 million iTunes so one way to think about the iTunes business is to say that iTunes users purchase content and services at the rate of about $40 per year.

That’s quite a performance for a “break-even” business.