iOS users surely love apps, and the most recent Apple press release just illustrates the fact in raw numbers. According to the Cupertino company, its customers have downloaded more than 40 billion apps, with half of them last year alone. 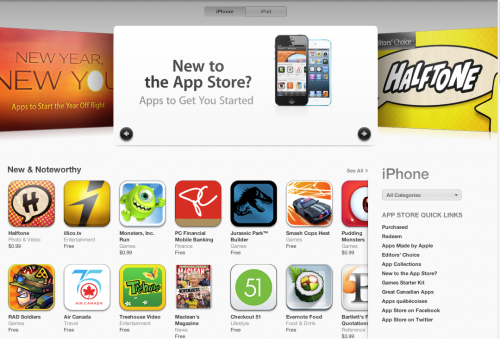 As the Flurry research already highlighted, the 2012 holiday season set the bar higher last year for app downloads with 1.75 billion (both iOS and Android) apps downloaded in one week, but Apple says December was an amazing month for the company, with more than 500 million active App Store accounts (which presumes an Apple ID) the App Store downloads have reached their highest ever level with 2 billion downloads during December.

Apple’s incredible developer community has created over 775,000 apps for iPhone®, iPad® and iPod touch® users worldwide, and developers have been paid over seven billion dollars by Apple.

“It has been an incredible year for the iOS developer community,” said Eddy Cue, Apple’s senior vice president of Internet Software and Services. “Developers have made over seven billion dollars on the App Store, and we continue to invest in providing them with the best ecosystem so they can create the most innovative apps in the world.”

The App Store surpassed the 700,000 mark a while ago now, and even the 1 million app submission milestone, and as Apple’s current stats show, there are more than 775,000 apps available for iPhone, iPad and iPod Touch in the store that is available in 155 countries worldwide. iPad apps have hit another milestone: there are more than 300,000 apps specially designed for Apple’s tablet computer