Electronics industry analyst Sun Chang Xu has made a couple of interesting predictions for China’s Electrical Engineering Times, noting that Apple’s much rumoured ‘iWatch’ will use optoelectronic sensor technology to keep track of heart rate and blood oxygen levels, AppleInsider is reporting. He added that a blood glucose monitor was also considered but the idea was dropped due to the “inaccuracy” of non-invasive blood glucose testing. 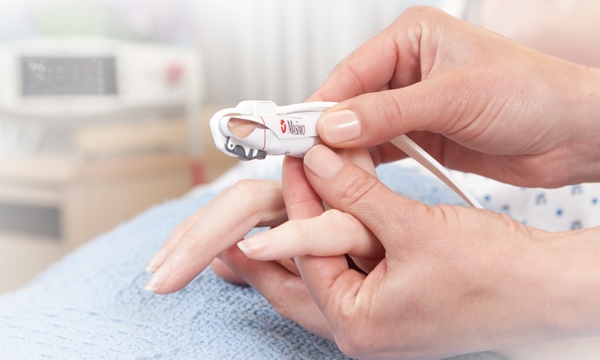 Those who aren’t aware, medical sensors use optoelectronics to measure changes in light reflected by the body. Pulse oximeters, which use optoelectronics to monitoring blood oxygen levels, are commonly seen clipped to the end of a person’s finger (as shown above). The source notes that Apple’s recent hires, Marcelo Malini Lamego and Michael O’Reilly, who are both former executives at pulse oximetry company Masimo Corporation, also add to the report’s plausibility.

To monitor the heart rate, the analyst says that Apple will use the light-based technology over electrocardiography, a more accurate method which measures electrical impulses.

“Most ECG-based products require multiple contacts, meaning users must either attach multiple diodes to their body or touch the product with both hands to get a reading. Many consumer-grade heart monitors — like Withings’s Pulse — use optoelectronics.

Apple has been seen contemplating embedded ECG sensors in the past, though there is little evidence to indicate where the company may be at with the technology.”

Apple is widely expected to launch the ‘iWatch’ in the second half of this year.