With Apple’s 2013 Worldwide Developers Conference set to kick off on June 10th, reports of leaked part codes and significantly constrained global inventory levels for all MacBook models seem to indicate an imminent refresh at the upcoming Apple event. A series of leaked SKUs obtained by 9to5Mac clearly hints at a refresh to at least one of Apple’s MacBook lines. 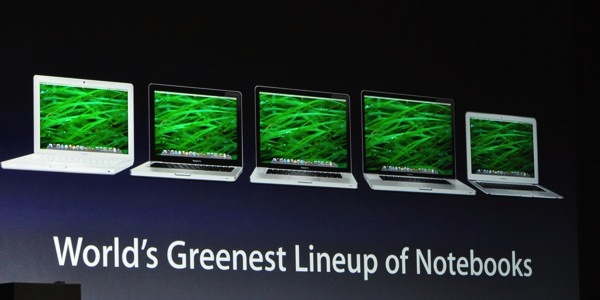 Leaked SKUs reportedly belong to a MacBook that comes in two screen sizes, each available in two configurations that will have different internal specifications such as processor speeds, RAM, and storage space. The source believes that the MacBook Air and MacBook Pro with Retina display, both of which come in two 11-inch configurations and two 13-inch models, fit a refresh with these SKUs. At the same time, it seems that global inventory levels for all MacBook Air and MacBook Pro with Retina display models are significantly constrained.

The first series of codes that we have received are:

Inventory constraints coupled with new part codes are likely an indication of an imminent refresh. Currently, though, we only have received one set of new SKUs, so we would say it is likely that at least the MacBook Air or MacBook Pro with Retina display will be updated next week.

Sources have also provided another set of Apple product SKUs, but we are not certain what these part codes belong to:

Meanwhile, inventories for the Mac mini and the Mac Pro are also reported to be constrained, but not as critically as the aforementioned MacBooks.

[caption id="attachment_389490" align="aligncenter" width="1400"] Image: Marcus Kane[/caption] As we count down the months to the launch of Apple's long-rumoured mixed-reality headset and, with it, an entirely new product category for the tech giant, we're starting to see more leaks and concept designs pop up. The latest concept renders of Apple's "Reality Pro" AR/VR headset imagine...
Nehal Malik
14 mins ago