For some, it’s all about the camera. They don’t care about the OS or the build quality and certainly not LTE. If you’re one of those ‘photo nerds‘ looking to upgrade your camera phone, then this would be of great interest to you. Folks over at Engadget have compared low-light shooting capabilities of today’s most popular smartphones i.e Lumia 920, iPhone 5, HTC One X, Nokia 808 and Galaxy S III. Find out which one comes out on top!

Looks like Apple’s flagship smartphone (and of course our favourite) couldn’t beat Lumia 920’s low-light shooting capabilities, coming up as the first runner-up. According to the tests, it didn’t perform as well in dimmer light when capturing images from a dark rooftop late at night as compared to Lumia 920, which offered the most even exposure of all of the devices tested. On the other hand, Samsung’s flagship smartphone was the biggest loser.

“Next up is the Nokia 808 PureView, which did a fantastic job compared to the other handsets, but required a longer exposure and lost significant color detail. For its part, the One X snapped some detail, but the image is hardly usable — it’s quite dark and noisy. Finally, the Samsung Galaxy S III just barely squeezed by, snapping only the brightest elements. All in all, it really won’t do”.

Check out the following shots for a much better idea: 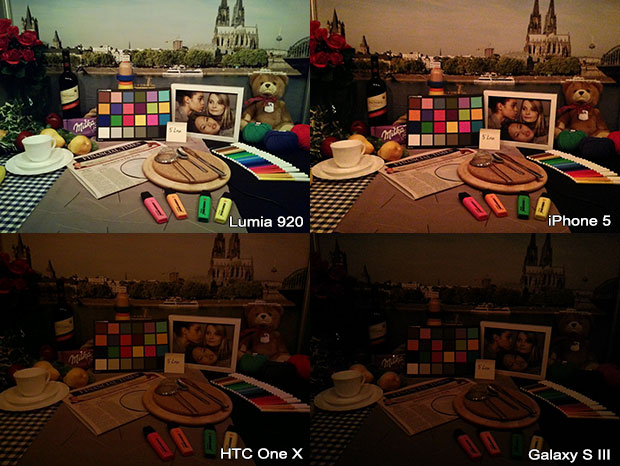