If you expected an LTE-enabled iPhone to arrive this year, you were most likely let down. A couple reasons why Apple had delayed a LTE device is due to the size of the Qualcomm’s existing modem utilized in the iPhone 4S. To implement first generation LTE chipsets would require a larger design, and also a bigger battery to power the device.

Clearly, Apple did not want to go down this path yet, as CEO Tim Cook said it himself during earnings conference calls, CNET reminds us:

Anandtech provides the most technical summary of LTE limitations:

The iPhone 4 PCB is already incredibly small, not leaving any room for an extra chip to enable LTE without shrinking the size of the battery (or increasing the thickness of the phone to accomodate both a larger PCB and a big battery). Today, Qualcomm is a leading provider of LTE baseband silicon and unfortunately they don’t ship any baseband hardware that supports both LTE and voice (over 1x/WCDMA) without extra silicon. In order to support both you need to be using something Qualcomm calls SoC Fusion. By leveraging a Qualcomm Snapdragon SoC in combination with Qualcomm’s MDM9600 LTE modem you can deliver both voice and LTE data. Otherwise the MDM9600 is only good for data, which is admittedly useful in things like USB modems or MiFis. Apple obviously doesn’t use Qualcomm Snapdragon SoCs so enabling LTE on the iPhone isn’t possible using Qualcomm baseband unless you make the phone’s PCB larger (which Apple obviously wasn’t going to do). Note that no one else seems to deliver a single chip LTE + 1x/WCDMA voice solution either, so this isn’t just a Qualcomm limitation. 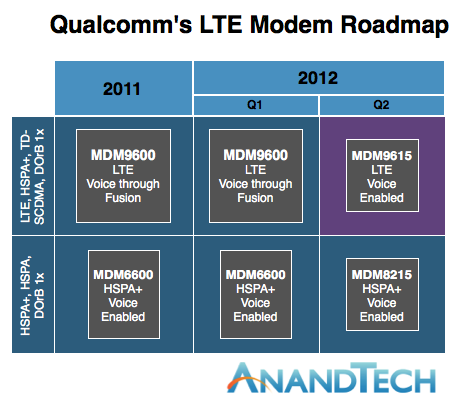 As much as I’d love an LTE-enabled iPhone, network coverage also remains an issue. Rogers and Bell have already debuted their LTE networks in various parts of the country, but it still remains limited at best. Network coverage aside, LTE chipsets are power hungry and battery life would be affected big time. Look at any LTE-enabled phone today–battery life is not something to brag about at all (remember the HTC EVO when it launched in the US?). So from here on, it looks like we’ll have to wait till 2012 for LTE chipsets to evolve until we get our precious, precious iPhone LTE.