‘M’ is Facebook’s Answer to Siri and Cortana Virtual Assistants

According to a report by Wired, a limited number of Bay Area Facebook users have been given the opportunity to beta test the company’s new ‘M’ virtual assistant. David Marcus, VP of messaging products at Facebook, believes that M can perform tasks that “none of the others can”, since in addition to using artificial intelligence to complete its tasks, “M is powered by actual people”, as opposed to Apple’s Siri, Google Now and Microsoft’s Cortana digital assistants. 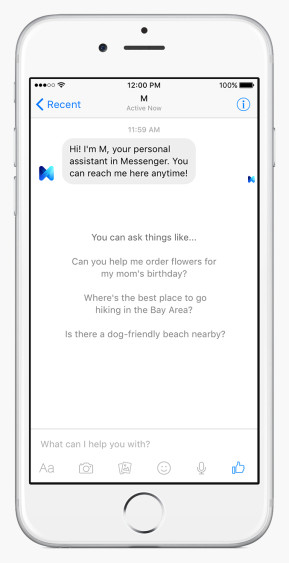 Facebook says that M is ‘a hybrid virtual assistant’ powered by artificial intelligence as well as a band of Facebook employees dubbed “M trainers”, who will make sure that every request is answered. Early testers will be prompted to test M with examples of what it can do, “Make restaurant reservations. Find a birthday gift for your spouse. Suggest—and then book—weekend getaways”. To try the new service, users will tap a small button at the bottom of the Messenger app to send a note to M, the same way they might message anyone on Facebook.

“M’s software will decode the natural language, ask followup questions in the message thread, and send updates as the task is completed. Users won’t necessarily know whether a computer or a person has helped them; unlike Siri and Cortana, M has no gender.

For now, M doesn’t pull from the social data Facebook collects to complete tasks. So, if you request a gift for your spouse, the service will make suggestions based only on your answers to questions it asks you and previous conversations you and M have had.

If M can provide a more efficient service than its competitors, Facebook can certainly boost the number of people using it on mobile, and eventually generate revenue from their transactions. To find out more, hit up the source link.

Wedbush Securities analyst and regular Apple bull Daniel Ives said in a recent note to clients that the iPhone maker's upcoming earnings report for its fiscal first quarter of 2023, scheduled for Thursday, February 2, will be the "most important earnings" for the tech market (via Apple 3.0). "After a horror show year in 2022...
Nehal Malik
26 mins ago