Nintendo’s Mario Kart Tour, which became the company’s biggest mobile launch with a staggering 90 million downloads in its first week, has now surpassed 123.9 million downloads across both the App Store and Google Play, generating $37.4 million in player spending since its release on September 25 (via Sensor Tower). 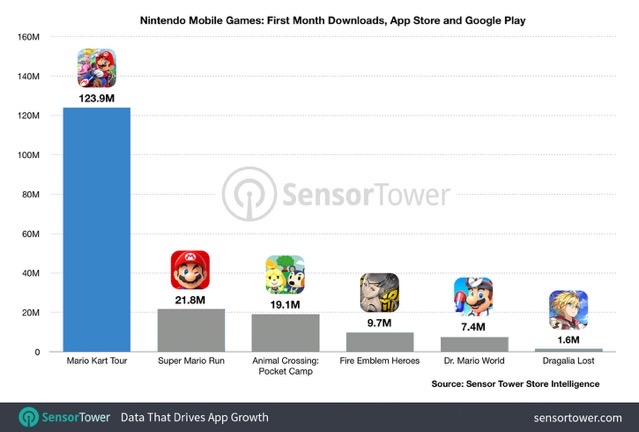 According to Sensor Tower, Mario Kart Tour has now passed Super Mario Run’s 21.8 million downloads more than five times over. However, the game is doing less well in terms of revenue per download, with an average of $0.26 spent per player.

In terms of overall revenue, Mario Kart Tour comes in at second place as well, losing out to the $67.6 million grossed during Fire Emblem Heroes’ launch month:

While Pokémon GO is the undisputed champion when it comes to mobile launches, Mario Kart Tour is still performing impressively, with its 123.9 global downloads equaling 76 percent of Pokémon GO’s 163 million downloads in its first 30 days.

It must be pointed out that Pokémon GO was initially limited to just the United States, Australia, and New Zealand, whereas Mario Kart Tour enjoyed a complete global launch.