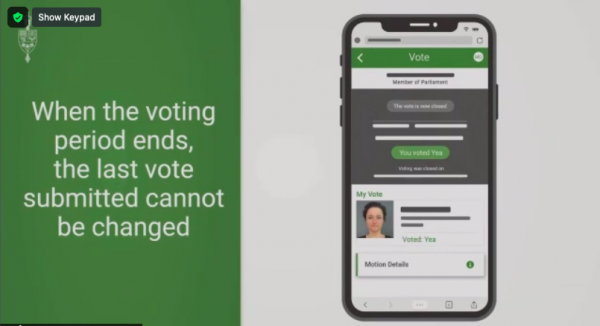 Due to COVID-19, Members of Parliament (MPs) have been meeting both inside the House and also remotely through Zoom. Voting with this hybrid format was time-consuming due to technical issues, with times amounting to nearly an hour, instead of the usual 15 minutes during the days of in-person voting.

But a new mobile voting app developed by House of Commons staff has cut this time down drastically, reports the National Post. MPs log into the app and first need to verify their identities. The Communications Security Establishment helped test the app to ensure it was secure.

While the new mobile voting app is convenient, MPs from all parties said it’s a temporary stop-gap until in-person votes return to the chamber.

“We still believe that voting in the House of Commons is one of the most important functions of an MP. Whether we’re voting on a budget, on a piece of legislation or a declaration that a country is committing genocide, MPs should be present, visible and accountable to Canadians for their votes,” said Conservative Whip Blake Richards.

During Monday’s first use of the virtual voting app, three MPs reported problems, while in a second vote, only one MP was unable to cast a vote. Backup votes were cast using Zoom.

Government House Leader Pablo Rodriguez said, “This will allow MPs to vote in a quick and safe manner — anywhere in Canada and they will have more time to do the rest of their important work. We look forward to having all MPs return to the House of Commons when public health experts deem it safe to do so.”

The new app for voting will be in place until the end of June, ahead of the summer recess for Parliament.