Mercedes Benz To Launch Its New A-Class With Siri Integration

AutoBlog is reporting that Mercedes Benz will show off its new A-Class at next month’s Geneva Motor Show with a new COMAND infotainment system, integrating Apple’s Siri voice-recognition technology. Mercedes will be the first automaker to support and integrate Siri in a car, allowing users to make appointments, send text messages and emails, get weather status and access all their songs through voice commands. 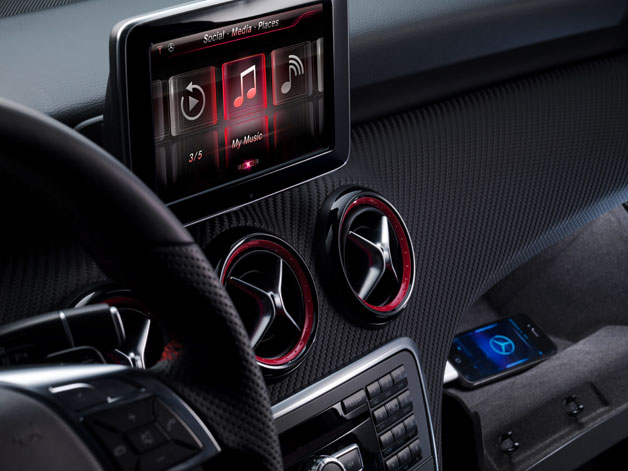 The user interface has undergone a complete overhaul, ditching the black and beige color scheme for a sharp, modern, three-dimensional design and a range of new features and functions, nearly all of which are centered on the iPhone 4S.

The new Digital DriveStyle app allows drivers to stream AUPEO! radio (Europe’s equivalent to Pandora), connect with Facebook and Twitter to read out status updates, find your car in a crowded parking lot and get real-time traffic data and point-of-interest searches through a new Garmin navigation system. All of which is available with the entry-level “Audio 20” setup.

Initially, these features will be limited to Euro-only A-Class models, but the German manufacturer has announced that the iPhone-integrated COMAND Online suite of services will also come to the B-, C- and E-Class models this fall.