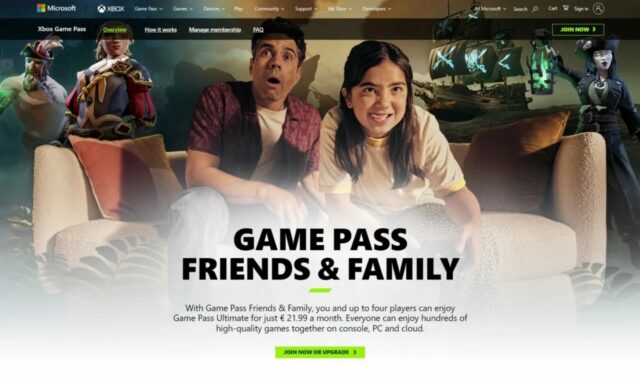 Microsoft has officially revealed the pricing of its new Xbox Game Pass Friends & Family plan as further tests are conducted in Ireland and Columbia. The company has been working on bringing this new plan for a number of weeks and now Microsoft has laid out some new details.

The official page for the Xbox Game Pass Friends & Family plan is now active. Navigating over to the page shows that Micorosft is offering the plan for €21.99 per month in Ireland, and 49,900 COP in Colombia. As far as relative pricing is concerned, €21.99 converts to roughly $28.98 CAD. The Xbox Game Pass Friends & Family plan enables up to four other members to be on a plan, which amounts to roughly $5.79 CAD per month.

Microsoft also confirms that friends and family can be added to a singular plan “whether they live under the same roof or not.” This means there are no restrictions to a group of friends getting together and all being a part of the same plan. The only caveat Microsoft states is that all members of the Xbox Game Pass Friends & Family plan must be located in the same country.

Currently, there’s no word on when Xbox Game Pass Friends & Family will arrive in Canada. Within the FAQ, Microsoft states, “Currently we are piloting this plan in Colombia and the Republic of Ireland. Future countries/regions might be added in the next months.”