Microsoft has today released an update to Outlook for iOS app, which is the first one that the Sunrise team helped create, that focuses on performance enhancements instead of adding new features. Meanwhile, Javier Soltero, VP of Outlook, has also shared some stats about Outlook’s mobile progress, announcing that the app now has 30 million users on smartphones and tablets, who use the app for 1.2 billion sessions a month, each 22 seconds long on average (via FastCompany). 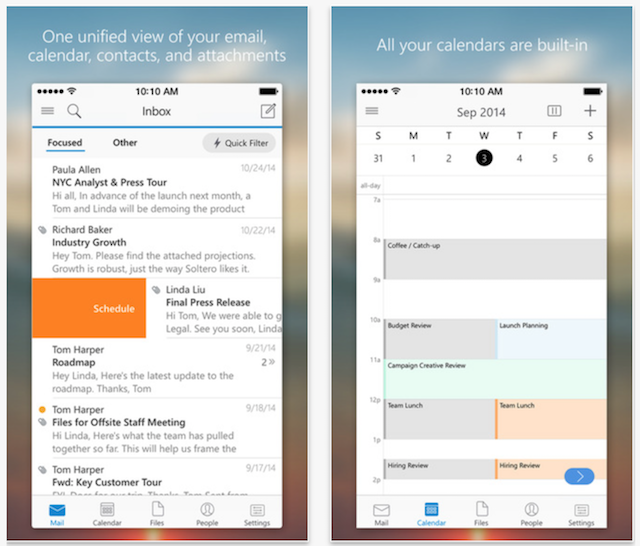 The updated Outlook for iOS app is much cleaner, faster and easier to navigate. In the inbox for example, messages with a calendar invite now sport an orange calendar so they’re easier to spot. Even the icon you tap to get to the calendar features now shows the current date. “My nonartistic way of describing it is, we injected a bunch of air into the app to make it feel more fluid,” Soltero says. “Consumers expect that”.

Soltero further explains that the aim was to “match the slickness” of the best consumer apps from companies such as Facebook and Google. While the Sunrise team has helped with Outlook’s new calendar features, they didn’t introduce Sunrise into the app in place of Outlook’s existing calendar functionality.

Useful Sunrise features, such as the way it pulls in weather information, aren’t present. Soltero told me that Microsoft plans to continue to beef up Outlook’s calendar until it, like Sunrise, is about “all the richness of calendaring and all the things that make it more than just a collection of meetings.” At that point, “The Sunrise app will be sunsetted.” He figures the process may take another six months or so.

There are, however, no plans to perform a similar merger between Outlook and Wunderlist. “The task domain is really its own universe of functionality and innovation,” says Soltero, who calls the to-do app “an incredible complement to the core Outlook experience.”

The latest video from Mrwhosetheboss reveals some Samsung smartphones are suffering from a swollen battery issue. Samsung dealt with a Galaxy Note 7 fiasco in 2016, when batteries for the smartphone were catching fire worldwide. Now, it appears some older Samsung phones are seeing batteries swell up, even when off and in storage. The tech […]
Gary Ng
55 mins ago