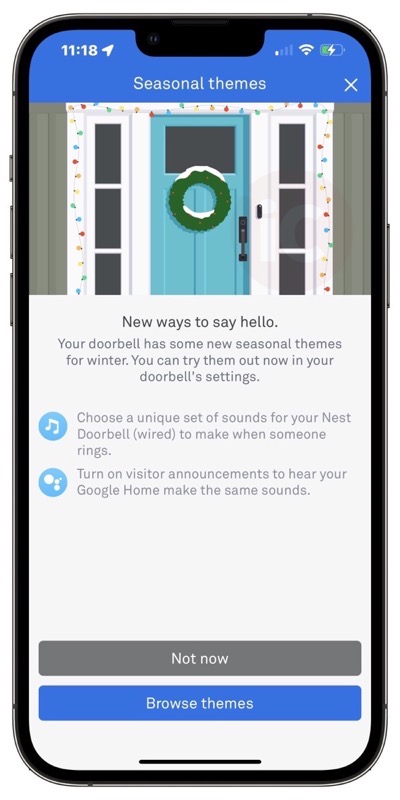 Google has released seasonal themes for its Nest doorbell (wired), offering a handful of new doorbell themes to choose from when someone rings your doorbell.

There are five season themes to choose from: Hanukkah, New Year’s Eve, Christmas, Winter and Kwanzaa.

You can change your doorbell’s theme by launching the Nest app, selecting your doorbell, tapping the settings ‘gear’ icon in the top right corner, scrolling down to Doorbell Theme (under Device Options) and then selecting the theme of your choice.

If you have visitor announcements turned on, you’ll hear the ringtone inside from your Google smart speakers as well.

Google usually enables seasonal ring tones through an over-the-air update so when the holidays are over, these doorbell theme options will disappear on their own from the Nest app.

Back in September, Google confirmed a second-generation version of its wired Nest doorbell will be coming in 2022. The news comes after its newest battery-powered Nest Doorbell was criticized for not having 24/7 video recording, due to its limited power source.

Following Morgan Stanley's estimate that Apple’s App store net revenue tumbled a record 5% last month, CNBC's Jim Cramer has said that investors should ignore negative calls about the iPhone maker and hold onto their shares. “The next time you hear this Apple mishegoss, you need to recognize that you’re still getting one more buying opportunity in...
Usman Qureshi
23 mins ago